Horizon Zero Dawn The Frozen Wilds Is “One Of The Most Impressive” 4K HDR Experiences Available; Tech Analysis Shared 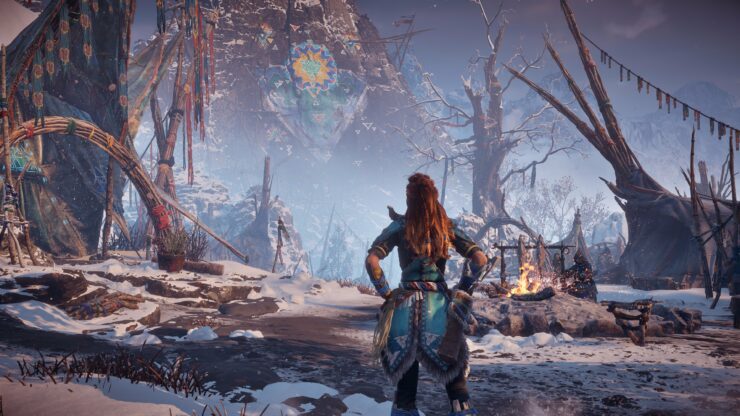 Horizon Zero Dawn, the open world game developed by Guerilla now out on PlayStation 4, is one of the most impressive exclusive games released this year on Sony's console. The game received a DLC expansion called The Frozen Wilds which adds plenty of new content to the game, such as a new area, new machines and more. Additional gameplay content isn't the only thing included in the expansion, as The Cut looks even better than the areas of the base game.

In a recent Horizon Zero Dawn The Frozen Wilds analysis video, Digital Foundry named the DLC as one of the best 4K, HDR experiences available, thanks to many enhancements found only in the DLC areas such as new snow deformation tech, improved lighting and animations and more.

There’s the sense that the artists and designers have been unleashed to create one of the most striking open world environments you can experience. Everything from the density per scene, the choice of colour, the fluidity of the animation and volume of assets really impresses here. We’ve seen a lot of large, open-ended games this year but it’s clear that Guerrilla Games stands at the top of the industry with its efforts. Even with the growing sense of open world fatigue, we found that the world and lore was interesting enough to carry us through the game, while the quality of these visuals and the solidity of the presentation is unparalleled.

Horizon Zero Dawn The Frozen Wilds is a worthy purchase for all those who have loved the main game. The story isn't all that impressive, and there are no real new gameplay mechanics, but the quality of the new gameplay content is so high that it's easy to look past these small issues.

With Horizon Zero Dawn The Frozen Wilds story lasting around 15 hours, the expansion is a more than worthy purchase for all those who have enjoyed the main campaign. In truth, it’s just more of the same, as there are no new major gameplay mechanics, but when everything is so good, can anybody really complain?

Sony’s Horizon Zero Dawn: The Frozen Wilds Trademark Gets Suspended Due to an Application Conflict