It seems like Huawei selling the sub-brand Honor did not go in vain as the latest confirmation finally tells us that the upcoming Honor 50 will be shipping with Google Mobile Services (GMS). The confirmation is coming from the company's German Twitter account and they have confirmed this information on Twitter. The confirmation was in reply to a tweet asking about an upcoming Snapdragon 778 phone, and the company has also made it clear that the device will ship with Google services.

In addition to that, Honor also confirmed that the upcoming Honor 50 phone would have the Magic UI on top with some of the new features that you could expect from Honor. The tweet and while the reply is in German, we have a translated screenshot below.

Spatial Audio on Android will be Limited to a Few Apps

Here is a translated screenshot. 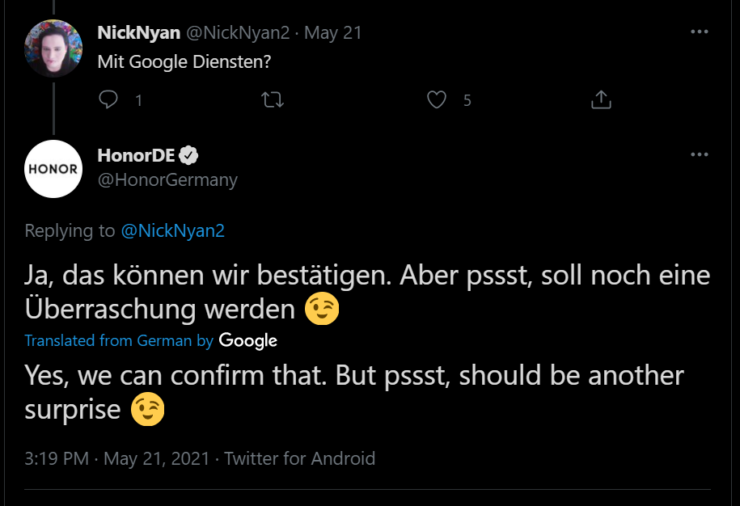 This makes the Honor 50 the first phone to launch with Google Mobile Services since the U.S. imposed strict sanctions on Huawei back in May 2019. This resulted in Huawei facing monumental losses and declining growth in the smartphone business mainly because of the lack of Google apps. This more or less resulted in Huawei selling Honor to another consortium based in China.

Now that Honor is an independent brand, they have been focusing on getting their relationship back on track with Qualcomm, Intel, and other tech companies; Google was obviously missing from the fold, but that seems to be no longer an issue.

With the budget device and a teased Snapdragon 888 device, Honor could easily make an entry back into the European and American markets and Asian markets, where it managed to hold a good position. However, we are not just when exactly Huawei will stand against the likes of Xiaomi, Oppo, and OnePlus, but this certainly is good news for the brand and the loyal consumers.