Although Haswell has been around for quite some time now, Corsair has recently released some very interesting gaming benchmarks that show just how much performance in Haswell CPUs is affected by RAM. Ofcourse the reason Corsair provided these, is because Haswell-E and DDR4 are coming up and the importance of buying good RAM needs to be stressed.

Apparently, there is a general consensus among gamers (one I was not aware of) that RAM above 1600Mhz does not really offer any significant performance boost. Corsair disagrees, and has answered by publishing these benchmarks. The benches were provided to us by Swedish site Sweclockers.com. Now these are very interesting benches. As you may recall, Kaveri APUs are significantly affected by the use of high quality RAM. Infact AMD has started releasing their own Radeon Gaming RAM rated at 2400 Mhz for this purpose alone. The same RAM would infact work  wonders on Haswell here as well, as the benchmarks will show you. Before we go into any further detail, the benchmarks: 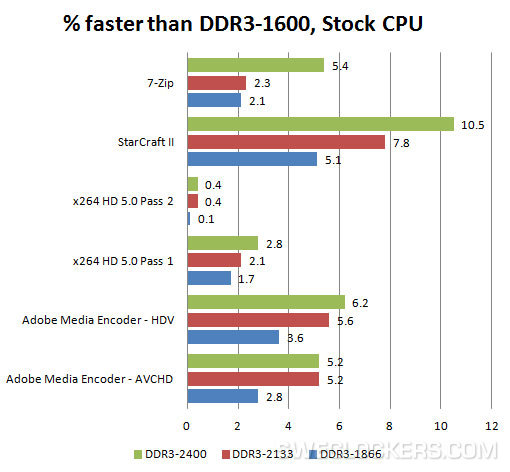 Now the benchmark is fairly straightforward. 4 Types of RAMs were tested, 1600Mhz, 1866 Mhz, 2133Mhz and 2400Mhz, all of them Corsair I assume. Now the DDR3-1600Mhz Benchmark has been taken as a base line of 0%. We can see that the jump from 1600Mhz to 1866 Mhz and then 1866 Mhz to 2133 Mhz is quite alot (7-Zip Excepted). However we can clearly see that the memory increments affect the performance of Starcraft II the most. The Performance gain is huge, considering you are only getting better RAM. Here is the second screen: 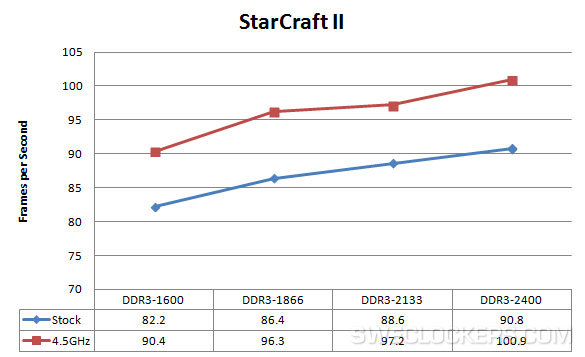 This graph is slightly more classical and also features an overclocked processor (at 4.5Ghz) to further elaborate the affect of RAM. Now both the red and blue lines are almost completely parallel. This proves without doubt that RAM will matter regardless of the fact whether you are playing at Stock clocks or on cold.  The approximate frame difference going from bottom order to top order is around 9. Which, once again, is very impressive considering that you are only adding RAM.