At least, that’s what Microsoft insider Klobrille writes on Twitter. The insider has proven to be a reliable source when it comes to Xbox-related info. Recently, Klobrille already talked about Halo Infinite and its release frame, and the insider has now shared some more interesting tidbits about 343’s next Halo installment.

Over the past few months, there have been quite a few rumors suggesting that that Infinite will offer a Battle Royale mode, but according to 343 Industries, these rumors are unfounded.

According to Klobrille, instead of the debunked Battle Royale mode, Infinite will offer a “Big Team Battle 2.0” instead, complete with squad spawning, massive vehicular combat, and more.

“To my limited knowledge, instead the team is creating a “Big Team Battle 2.0” mode, which is a better fit for Halo, including massively enhanced vehicular combat, squad spawning, incoming Pelican drops, and many more surprises”, the insider wrote in a now-deleted tweet. 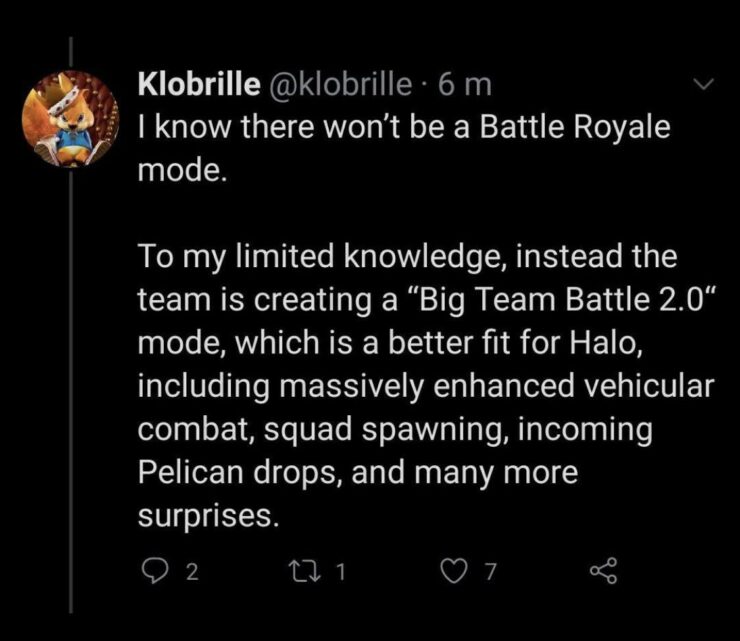 Halo once was a series about setting trends, not following them. The fact 343 tries to go back to this principle is a good thing.

Forge will be MASSIVELY expanded on in Halo Infinite. I’m sure if players would want to see a Halo Battle Royale mode, players could just create it.

Quite interesting, but as with all rumors and ‘leaks’, please take this information with a pinch of salt for now. Still, Klobrille has proven to be a reliable source in the past.

Halo Infinite is slated for a release on Xbox Series X|S, Xbox One, and PC later this year. An exact release date hasn’t been confirmed just yet. Check out the much-debated Halo Infinite campaign gameplay trailer that Microsoft debuted back in July of last year down below:

In Halo Infinite's campaign, the Master Chief returns when humanity's fate hangs in the balance to confront the most ruthless foe he's ever faced – the Banished. The legendary Halo series returns with the most expansive Master Chief story yet. Enjoy a first-look at Halo Infinite campaign gameplay, captured real-time and representative of the experience on Xbox Series X running at 60FPS and up to 4K resolution.