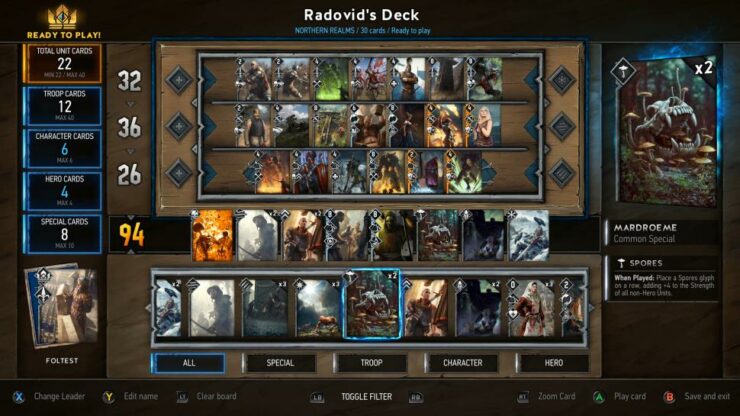 Despite being far from a triple A production, Gwent The Witcher Card Game is definitely among the most interesting games that are being shown at the Gamescom this year. CD Projekt Red's idea regarding the game is pretty simple: creating a game that can be picked up in 15 minutes but with enough depth to keep the most hardcore Gwent fan occupied for a very long time. Judging from the Gamescom 2016 presentation, the team is, without a doubt, on the right track.

During the presentation, between an amazing Gwent The Witcher Card Game Wild Card beer and another, we have been shown some gameplay from one of these campaigns, and I was quite surprised to see how well the actual story segments are integrated with the Gwent gameplay. During these campaigns, players will see scenes featuring illustrated backgrounds and characters with full voice acting. Geralt's voice actor reprises his role in Gwent The Witcher Card Game, so we should expect all the other characters to keep their original voices as well.

What really impressed me is how the Gwent The Witcher Card Game single player mode isn't going to be one Gwent match after the other. Once a story sequence has ended, players will be able to move Geralt around a map, with plenty of optional locations to discover, which can yield nice rewards, such as new cards, if explored. Choices and consequences will also be in the single player campaigns, making the mode feel like another main entry of The Witcher series.

Unfortunately, we weren't able to try out the single player mode, but we had the chance to play a couple of Gwent matches against one another. While the basic rules of the game haven't changed from The Witcher 3, there are new features which make the experience more satisfying, such as the full 3D scenes when checking out cards, characters making comments during heated moments of the match and more. As for the changes, it's clear how CDPR has been thinking long and hard on how to make Gwent fair to both players: players can now swap 3 cards at the beginning of a match instead of two, spy cards are no longer overpowered, and decks have more distinct features, which don't seem to overlap much. The changes didn't prevent me from winning the two matches against my opponent, though, so Gwent veterans will find no trouble in adapting to the changes almost straight away.

Once the session was over, I left the Gwent booth with a huge smile on my face. With so many interesting features, and an easy to pick up and harder to master experience, Gwent The Witcher Card Game has literally all the cards to compete with the biggest CCG currently on the market. The Witcher 3 will not receive another expansion, but that goodbye at the end of Blood and Wine wasn't final at all: the White Wolf is as strong as he's ever been.