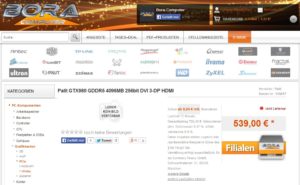 One could argue that this pricing is after conversion since the Euro is stronger than the dollar the product should naturally cost less Euros as compared to US Dollars. However we can clearly see at the same retailer GTX 770 and GTX 760 cards listed for 330 Euros and 250 Euros respectively which is the exact same pricing in USD at newegg for the same EVGA GTX 770 and 760 cards.
Electronics are often more expensive in Europe almost entirely due to this reason. The majority of electronics sold there from the US simply carry the same US MSRP but in Euro.

There are no photos posted for either of these cards but it's quite possible that the listing for the Palit GTX 970  is actually for a non-reference card. Which could explain why it carries a 19€ premium. We don't know yet if we're going to see custom GTX 980 cards at launch but we know that there is a plethora of custom GTX 970 cards coming from MSI, Galaxy, Gigabyte, EVGA, Zotac and basically all Nvidia add-in board partners.

The pricing for the GTX 970 is very aggressive and will certainly not go unnoticed by AMD. So expect a whole slew of new price cuts from the red team across the board. I would not be surprised to see the R9 290X come down to as low as $399 and the 290 for even lower. In fact we've already found a brand new R9 290X listed at amazon.com for $408 perhaps this is a taste of what's to come. Stay tuned this GPU war is going to be a bloody one !

Here are the specs for Nvidia's upcoming champions in case you missed them !