You would be forgiven for thinking that this particular Black Edition means 6GB worth of GDDR5 memory because of the similarity to Titan Black, but this particular GTX 750 Ti Black Edition is just a very market aware use of nomenclature on Gigabyte's part to sell a particularly good variant of the Maxwell GTX 750 Ti. Of course the Wind force 2x Cooling system will leave a lot of headroom for over clocking as well, not to mention the rigorous stress testing it has gone through means some serous stability for server uses. 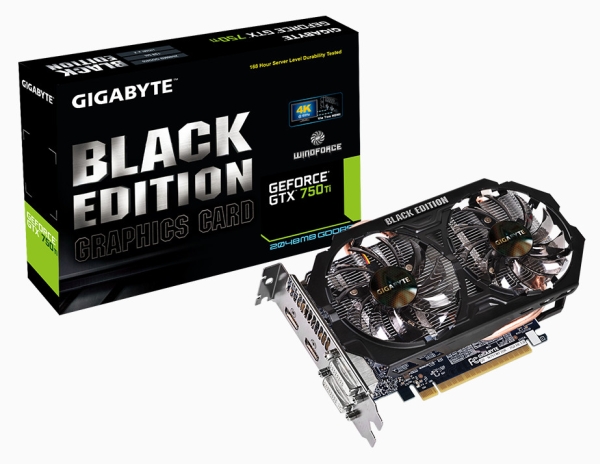 The card has no relation to the GTX Titan Black in any way whatsoever. However these series of cards had to pass 168 Hours of difficult stress testing to earn the "black" suffix and will come with a certificate of the same. This will mean that this hardware is server ready because a 168 Hour long stress test is usually sufficient for even the most difficult of circumstances. This card is very subtly aimed at the server market as well as the usual game market. The Maxwell 750 Ti is one of the two most energy efficient GPUs in this spectrum and with the high stability rating, it would be a good option for server grade work. For example these would be ideal in a low level server or a cluster compute setup using Maxwell 750 Ti Blacks and LGA 2011 Intel parts. Cost effective while keeping the power consumption under check.

That being said the specs are quite good and should prove to be an overclockers dream as well. Short of going for a water block, this should offer the most returns in the temperature overhead department. The exact specs of the card are as follows. The base core clock is 1033Mhz while the base shader clock is 1111Mhz. The boost clocks are 1163 and 1242 Mhz respectively. These are boosts of more than a 100 Mhz, which for graphic cards, is pretty decent, and I am sure there is still some more headroom left for the enthusiast. The memory is clocked at 5400Mhz and all in all this card should perform beautifully. We have no word on price yet, but you can be rest assured that the 168 hours of stress testing will be reflected in the tag.

#Nvidia 750 Ti Black by GB has 168 Hours of stress testing. If thats not subtle server targeting then idk what is. http://t.co/xik1wXrQEw