As this year comes to its end, Rockstar’s peerless action-adventure open world game that was originally released last year withholds its royalty by ranking among some of the most sold next-gen remasters of this year. The game shines as much on the latest consoles as it did on the last-gen systems, and while there is still some time before we see how powerful PC hardware lightens up the in-game city of Los Santos, here are some screenshots from console version of the game that shows how it already matches up quite well with the real-life Los Angeles city. 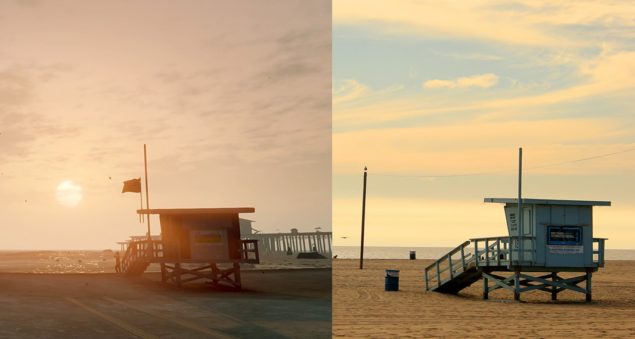 Rockstar indeed put a great deal of work into the production of GTA V on the last-gen consoles, and this year’s remastered version of the title shows how the developer managed to further refine and optimize one of the best-selling video games on the latest consoles. Based on real-life Los Angeles city, the GTA V’s in-game Los Santos city is full of bright lights and stunning photorealistic environments. There are tons of settings in the game that match perfectly with the real-life locations found in Los Angeles.

Contradicting the real-life rich values of the City of Angles, Rockstar has shaped Los Santos in GTA V as a sun-baked metropolis full of psychospeak masters and fading celebrities. Once the place everyone couldn’t stop talking about, now struggling to keep on the straight road in an era of economic uncertainty. Keeping aside the setting and the storyline of the game, Los Santos visually looks similar to Los Angeles in many ways. Thanks to a well-known Spanish photographer, you can check out the screenshot comparison between the in-game Los Santos and real-life Los Angeles for yourself below, showcasing how Rockstar beautifully managed to replicate the real world.

Note that you can always click on title of the image to view it it full size.

You can check out the complete gallery here. Rockstar’s GTA V is already out on all the major consoles, and the game will be released on PC next year on January 27.