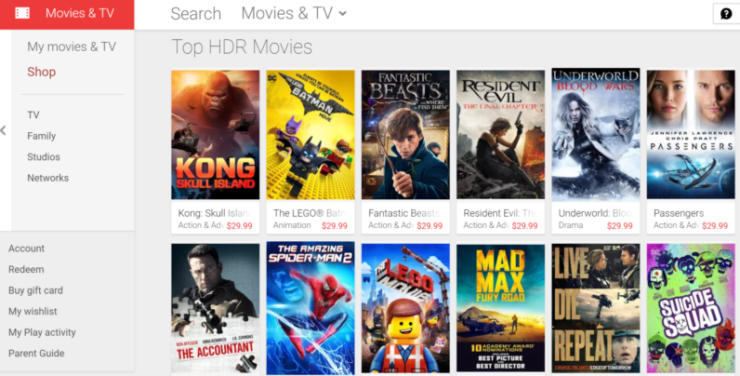 Google has announced a couple of significant changes to Play Movies & TV that will have a considerable impact on owners of 4K televisions. Starting today, some previously-purchased movies will automatically be upgraded to 4K quality once available. Additionally, the price of newly released and upcoming 4K content on the platform is also going down.

Content from participating Hollywood studios such as Fox, Lionsgate, NBC Universal, Sony, and Warner Bros purchased in SD or HD quality will be available to stream in 4K as soon as that is available. The free upgrade only applies to movies purchased before today. Anything you purchase from now on won't be upgraded.

We think watching in 4K should be a no brainer, so we’re continuously working to make that a reality. With Google Play, it’s now easier than ever for you to watch movies in the best quality possible, no matter which device you're using. And it doesn't stop here, we'll continue to make improvements so you can sit back, relax and enjoy your favorite movies, whenever and wherever.

The average price of 4K films on Google Play is now lower than before. You can check out Google's top 4K movies here; some can be had for prices in the single digits. Most 4K Samsung Smart TVs are now able to stream 4K content in the Google Play Movies & TV app, too, something that previously required external hardware like a Chromecast Ultra. Google says it's working with LG to get the functionality up and running on that company's sets, as well. Although 4K TVs have been around for a while, there's a severe lack of content available online and hopefully; we get more of it as more people get their hands on 4K-ready hardware.