After a long, long time of teasing and speculations, Google Pixel 5 is finally being announced later this month as Google has started sending invites for the event. As we expected, the Pixel 5 is not the only device that will be revealed during this event as we are going to get a look at the new Chromecast along with the new smart speaker that will be introduced during this event.

Google Will be Announcing Pixel 5, New Chromecast and New Smart Speaker on the September 30th Event

Now, if you have not already guessed it, the event is going to be virtual, and that is something we already know but at the same time, it is important to understand that it is better that way. The invite looks good, and looks like a traditional invite from Google would look like. You can look at it below. 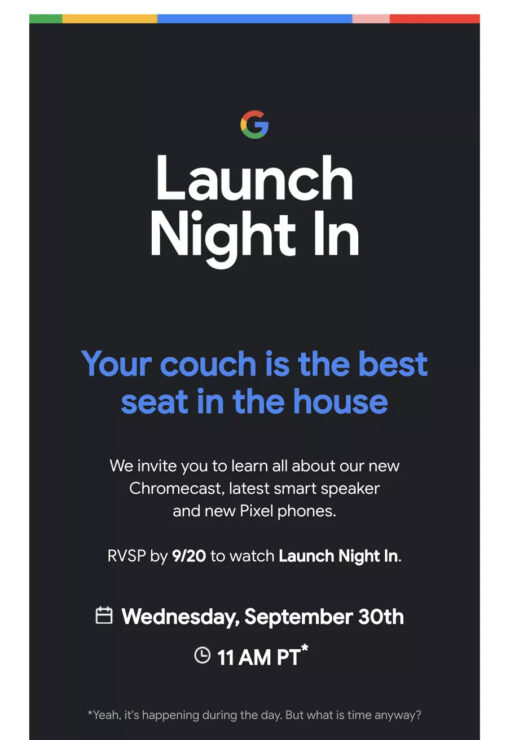 Now everything aligns, but the most interesting take away from this invite is hidden away in the last line. As you may have read, the invite says that Google is planning on telling us about the new Chromecast, the latest smart speaker, but the last line also reads "new Pixel phones". Which could mean that Google is planning on launching both the Pixel 4a 5G and the PIxel 5?

There has been a lot of information about the Pixel 5 in the recent weeks with the latest leaked images leaking online and showcasing the punch-hole camera, along with a rear-mounted fingerprint reader and other similar details.

Additionally, only 3 weeks ago there was a tip that said that the Google Pixel 5 along with the rest of the devices will be launching on September 30th and seems like the leak was on point.

If the speculations are correct, Google Pixel 5 will be the first Google flagship that will offer mid-range specs, probably a Snapdragon 765G, and the Pixel 4a 5G will perhaps sport the same specs, but until the event, we cannot say what we are going to get.