Google Pay is a pretty good service for those who prefer contactless payments. It is convenient and simple as it gets. However, if you are a regular user of this payment system and you have just upgraded to Android 11 Beta 1 that Google released yesterday, we are sorry to report that the feature is no longer functional, at least not until Google releases a fix.

Before we start getting the pitchforks ready, we have to understand that Android betas always have some quirks here and there that end up breaking one functionality or the other. So, it is nothing new. On top of that, Google Pay happens to be pretty fragile when it comes to software changes or releases. Obviously, an app that is responsible for having all the sensitive information pertaining to payments and other similar information, the security needs to be up to the mark.

As tradition goes, these beta versions normally don't come with all the security in place and are normally intended for developers to try their hands on apps for the latest version of Android. However, at the moment, Google Pay does not work on Android 11 Beta 1. Which might come as a surprise as the app was working fine on Android 11 Developer Preview 4.

The error comes in two different forms. The first one happens when you are setting up Google Pay for the first time on the device after a fresh install; it will simply fail to verify the card for in-store payments. However, if you already had Google Pay setup before you updated to the beta, it will work for a while, but then you will be given an error saying "Your phone is no longer ready for contactless payments." You can check out the screenshot below, courtesy of Reddit. 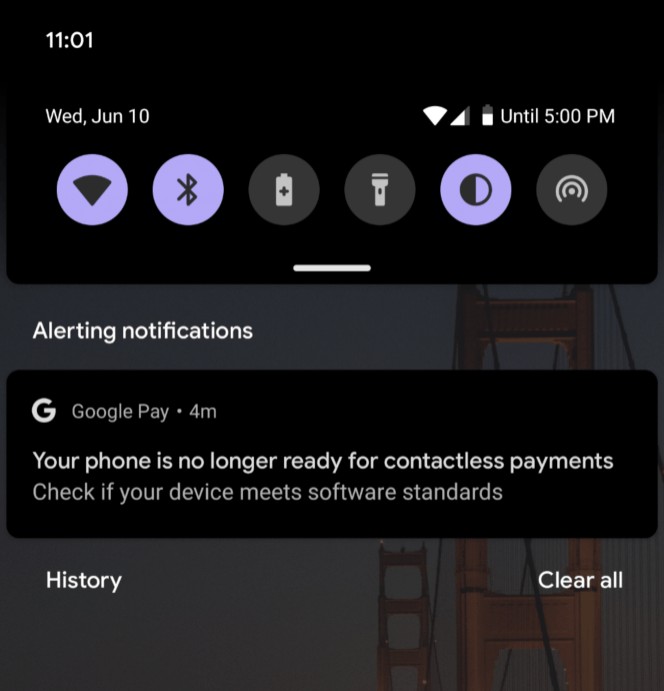 For anyone who is familiar with using Android beta builds in the past, this is a pretty common error, to begin with. Don't worry, this might be fixed in the next beta, and will definitely won't be a problem in the final release.