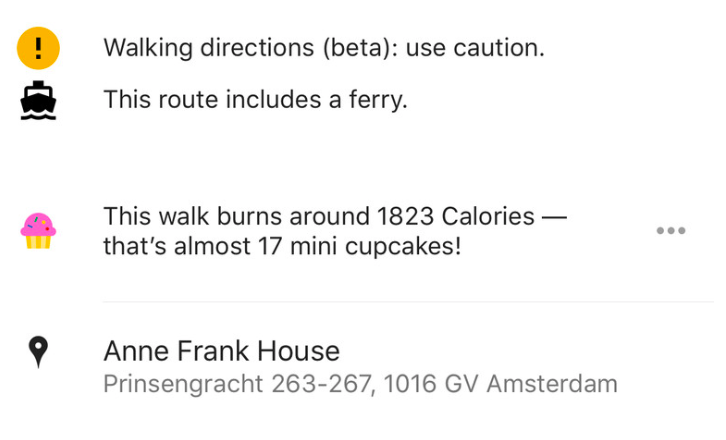 After receiving backlash online, Google has cut down a feature from its Google Maps for iOS that tracks your calories when you walk from one location to another. A Google spokesperson said in a statement that the removal of the feature is "based on strong user feedback." This feature will no longer appear on the app and users will no longer be informed about the calories that they will lose by walking the distance.

Every mile walked burns 90 calories for an average person. However, it does not clarify the standard for an "average" person. The online backlash was mainly regarding the effects this feature could cast on users with eating disorders.

For now, we don't know whether Google will bring this feature back. Maybe, Google can bring the feature back with alterations such as giving an option to disable the calorie estimate. Another fix for the issue is by making the feature better by adding personalised elements like age, height, weight, and gender.

We understand that such feature could have triggered users with eating disorders, but for many users who are trying to lose weight, such functionality could have helped in their weight loss journey. Anyway, Google has removed the controversial feature, but we hope it comes up with an enhanced version of it.

Even CityMapper has a similar calories tracking feature

It's worth mentioning that this is not the first time when a navigation app has inducted such feature, CityMapper had been tracking calories for quite some time now. But it is not as popular as Google Maps, which has saved it from the user backlash.

What's your take on the issue? Do you think the feature was worth nixing? Share your thoughts in the comments section below.