Apple and Google are not only rivals in the mobile platform industry, they have also become rivals in the mapping industry as well. Google is the mapping maestro, as its Google Maps and Google Earth services have become a household name around the world. Apple recently stepped up its game and replaced Google Maps with its own in-house mapping solution for the upcoming iOS 6 firmware. Apple's offering features 3D maps, but its public release is not yet known. The internet search giant today released Google Earth v7.0 which brings 3D maps to the iPhone, iPad and iPod touch. 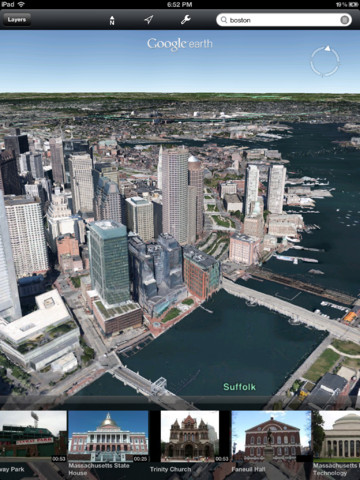 This particular Google Earth update for iOS is at par with the one released for Android devices over one month ago. As previously mentioned, Google has beaten Apple in the race to bring 3D maps on iOS devices. Whether or not this fact means something to Apple is an entirely different thing. It should be kept in mind that with iOS 6 Apple is offering a mapping solution which has been built from scratch, whereas this essentially is an update to the pre-existing Google Earth app.

Google Earth v7.0 comes with a feature called our guide. It allows you to explore places you have never seen before and provides new tours of your favorite cities, historic landmarks and natural wonders. The major feature is obviously 3D Maps, which are available for a total of 14 locations right now which include but are not limited to Los Angeles, Boston, San Francisco, Geneva and Rome. Google assures us that more additions will be made in the coming weeks.

This latest Google Earth for iOS can be downloaded right now free of cost from the iTunes App Store. The app is compatible with any iOS device capable of running iOS 4.2 or higher. Keep in mind though that 3D Maps only work on newer iOS devices such as iPad 2, iPhone 4S and the New iPad.