Gigabyte's upcoming Radeon R9 290X OC edition custom graphic card with their high-performance WindForce 3X cooler has been spotted by Hardware.Fr. Many enthusiasts have been avoiding the AMD's new flagship Radeon R9 290X until custom cards launch since the reference variants produce alot of heat and noise which results in a variable clock rate which doesn't equate to stable performance. 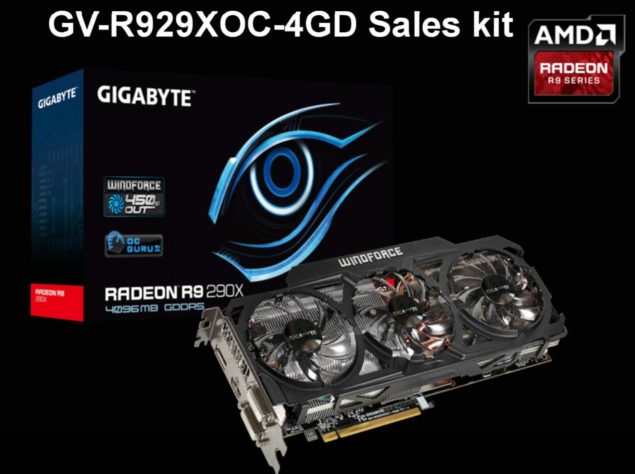 Images are courtesy of Hardware.FR!

The Non-Reference designs will be here around next month to fix these issues that are currently faced on the reference models. We have already seen an MSI Lightning Radeon R9 290X and ASUS Radeon R9 290X DirectCU II in the works and today we get to take a look at Gigabyte's custom solution.

The Gigabyte Radeon R9 290X OC edition known as the GV-R929XOC-4GD will feature 2816 Stream processors, 64 ROPs and a 4 GB GDDR5 memory running across a 512-bit interface clocked at 5 GHz effective speed. The core for the custom card would be maintained at 1040 MHz which is 40 MHz higher than the reference variant but will also allow some decent overclocks thanks to its custom PCB design fitted with top notch components and a beefy cooler that does its job greater than any reference solution.

The Gigabyte Radeon R9 290X OC ships with the company's high-performance WindForce 3X cooler which comes with a triple fan design shroud design which push air towards large central aluminum fin array heatsinks interconnected with 6 copper heatpipes dissipating heat from the base plate. The WindForce 3x has the is able to dissipate upto 450W of heat so don’t worry about heat when doing some overclocking on this beast. The cooler also produces much less sound at 15.9 dB lower than the reference models operating in "Quiet Mode". The extra cooling will ensure that the PowerTune technology operates at optimal state with lesser clock speed variation and adequate cooling performance.

Launch and price date were not mentioned but you can expect a price of around $600 US for the non-reference models when they launch around CES 2014 or earlier.