With Kaveri APUs pushed to early 2014, motherboard manufacturer's can't wait out but to launch their next iteration of A88X chipset based FM2+ socket motherboards. Gigabyte being one of the leading motherboard makers has launched new FM2+ socket boards which support AMD's current FM2 and upcoming Kaveri APU lineups. 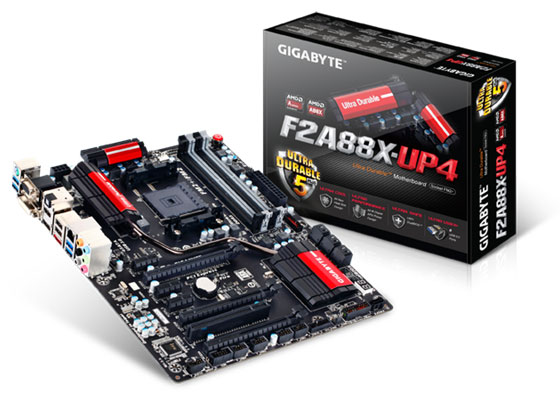 The F2A88X-UP4 is the top tier FM2 board aside the G1.Sniper featuring an Ultra Durable 5 design with an 8 Phase PWM supply. The CPU is supplied power through an 8-Pin connector while we can see a large heatsink set laid out next to the VRM and on the PCB interconnected with a heatpipe to dissipate heat. The FM2+ socket is largely similar to older FM2 and AM3 sockets so it should be easy to reuse coolers on the new socket since the retention bracket is same. Four DDR3 DIMM slots offer support for 64 GB of memory with speeds of 2133 MHz+ O.C. There are 6 SATA 6GBps ports along with a front header USB connector. The image is quite small but i can spot a 7th SATA port right near the edge of the PCH heatsink beneath the DEBUG LED. Expansion slots include three PCI-e x16, three PCI-e x1 and a single legacy PCI slot. I/O includes, 4 USB 3.0, 2 USB 2.0, HDMI/DP/VGA /DVI, Gigabit Ethernet, PS/2, SPDIF and a 6 Channel Audio jack ports powered by Realtek ALC898.

The G1.Sniper A88X is the second A88X chipset and FM2+ socket based product that sticks loyal to its green and black theme. The CPU is powered by an 8-Pin connector and offers 8 SATA ports, two PCI-e x16, three PCI-e x1 and two PCI slots. The up gradable OP-AMP exists on both parts. Aside from these two parts, Gigabyte's FM2+ socket motherboard lineup includes:

Press Release - “We’ve had a lot of customer interest in expanding our G1-Killer gaming motherboard range to include an AMD platform model.” commented Henry Kao, Vice President of GIGABYTE Motherboard Business Unit. ”By also developing unique audio features that make a real difference to the overall experience, we’re confident this board will be a real hit with gamers and audiophiles alike.”

USB DAC-UP
Featuring a gold plated USB 2.0 port, GIGABYTE USB DAC-UP provides clean, noise-free power delivery to your Digital-to-Analog Converter. DACs can be sensitive to fluctuations in power from the other USB ports, which is why GIGABYTE USB DAC-UP takes advantage of an isolated power source that minimizes potential fluctuations and ensures the best audio experience possible.

GIGABYTE USB DAC-UP also allows the port to be configured in BIOS for enthusiast system configurations which do not require USB power to the DAC. This makes it suitable for high-end audio enthusiasts building extreme fidelity audio systems.

Upgradable Onboard OP-AMP
GIGABYTE motherboards are the world’s first to feature an onboard operational amplifier (OP-AMP). OP-AMPs are commonly found in high-end audio equipment and offer not only amplification of the audio signal, but a superior audio experience generally. The motherboard’s OP-AMP is mounted on a socket which allows users to physically switch out and try different OP-AMPs which offer distinct and nuanced properties that make the audio clearer, punchier and more life-like. Additional OP-AMPs can be purchased separately to further expand audio capabilities.

Gold Audio Plated Hardware
The GIGABYTE G1.Sniper A88X motherboard uses top quality gold plated hardware for improved connectivity and long lasting durability for the USB DAC-UP port and audio connectors. Gold has superb signal conductivity and will not tarnish over extended periods of use. The Realtek ALC898 audio processor is also shielded by a gold-plated cover which eliminates electrostatic interference.