AMD still has sometime left to unveil their AM4 platform but today, they are updating their FM2+ and AM3+ desktop platforms. The latest updates include a range of new processors for the FM2+ socket, price cuts for AMD FX processors and a range of updated motherboards (AM3+/FM2+) which get features like USB 3.1 Gen 2.0 (Type A and C) along with new M.2 SATA SSD controllers to support the latest generation of storage drives.

The refresh includes three new processors which AMD is launching today. These include the AMD A10-7680K, A6-7470K and the Athlon X4 845. There's another processor which is going to launch soon which is called the AMD A10-7890K however that APU will be launching a little bit later in Q1 2016. All processors launched are based on the 28nm process node however, the A-Series chips utilize the Steamroller architecture while the single Athlon processor utilizes the Excavator architecture which is last of the construction cores that AMD developed. 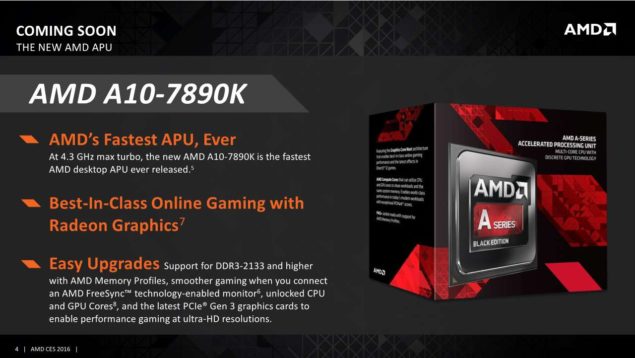 Coming to the specifications, first of all, we have the A10-7890K. While the processor isn't launching today, it should be mentioned that this will be the flagship AMD APU until the company releases their Bristol Ridge APU series. The AMD A10-7890K being the flagship APU of the lineup featues a 4 core and 4 thread design. The chip boasts a clock speed of 4.1 GHz base and 4.3 GHz boost while featuring an unlocked design for overclocking. The chip is featuring the Radeon R7 graphics core based off the Sea Islands GCN architecture that has 512 streaming cores and a clock speed of 900 MHz. The chip will feature 4 MB of L2 cache, 95W TDP and DDR3 memory support of up to 2133 MHz. It will feature a price close to $139.99 US since that is what the A10-7870K currently retails for in the market. 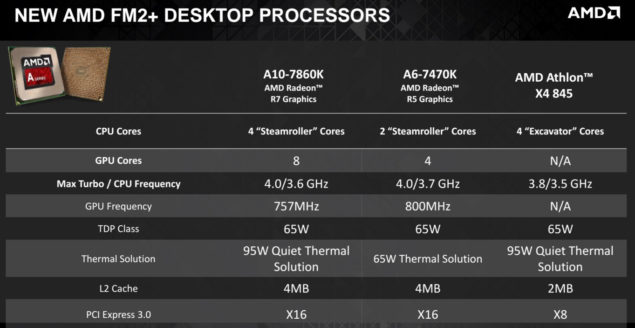 Next up, we have the AMD A10-7860K and the A6-7470K. The A10-7860K is a quad core chip with core clocks of 4.0 GHz base and 3.6 GHz boost clock. It packs 4 MB of L2 cache and comes with a Radeon R7 graphics chip that features 384 stream processors and a clock speed of 757 MHz. This APU is packed with a 95W Thermal solution that is one of the latest variants AMD is introducing today. The A6-7470K is a dual core processor that features clock speeds of 4.0 GHz base and 3.7 GHz boost clock. The chip packs 4 MB of L2 cache and a Radeon R5 series graphics processor that comes with 256 stream processors and clocked at 800 MHz. The chip is bundled with a 65W solution that is enough to cool it down. This cooler is also the latest iteration of reference coolers that has been introduced by AMD.

The new AMD 95W and 65W Quiet thermal solutions are the latest products being bundled with the A-Series and Athlon processors. Offering better air flow, lower noise and improved thermals compared to previous gen reference coolers, the new thermal solutions are a really decent addition by AMD with their latest chips. The solutions are packed with a range of new processors while the Wraith cooler serves the high-end space. The coolers pack a large aluminum fin array, the 65W solution is a densely packed block with a red colored fan that pushes air towards the center of the aluminum fin chamber while the 95W solution uses a larger aluminum fin block with copper pipe solutions that runs from a copper base with mirror finish. Both coolers look great and are a great addition since they do come free of cost.

Finally, we have the single Athlon X4 845 chip which is based on the current Excavator architecture.  The chip has a core clock of 3.5 GHz base and 3.8 GHz boost clock. The chip packs 2 MB of L2 cache and a 65W TDP. It is designed to handle overclocking and hence comes with a 95W  cooling solution. Being an Athlon chip, the CPU doesn't feature any onboard graphics chip and allows just PCI-E 3.0 x8 link with an external graphics card. The Athlon X4 845 will retail at a price of $69.99 US. 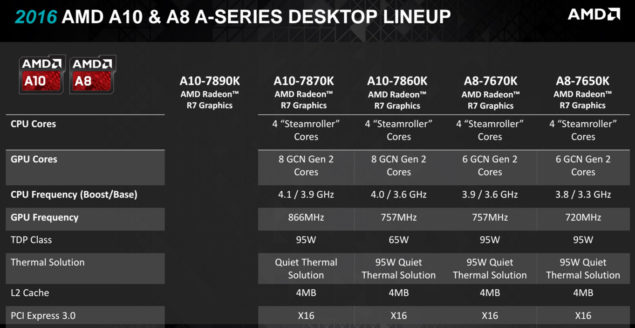 To sum it up, AMD is offering new processors and cutting prices on already available processors. These include the APU and CPU families. The pricing model is as listed below: 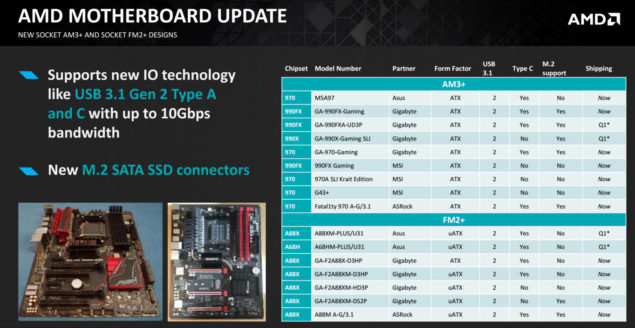 AMD’s board partners are also offering refresh AM3+ and FM2+ motherboards for users who are planning to purchase a current generation AMD CPU or APU platform. The new updates to the lineup will include the addition of USB 3.1 and M.2 storage support (through external controllers). This sounds like a really good update even though AMD will be soon introducing their AM4 motherboards which will be part of their unification strategy that brings APUs and CPUs on a single platform/socket. MSI, Gigabyte and ASUS have new motherboards as listed by AMD in their own slides.

It's really great to see that AMD still supports their AM3+ and FM2+ platforms even though they are close to launching their AM4 platform which will unify both APU and CPU platforms. In 2016, AMD's Zen will determine the fate of the company as it is planned to deliver more than 40% IPC lead over their Excavator architecture which is the last updated design to their construction cores. Only time will tell if AMD manages to meet the exceptions of many fans and PC builders with their next generation Summit Ridge and Bristol Ridge families.