Gigabyte's upcoming GeForce GTX Titan WindForce 3x has been spotted by the folks over at HardwareZone. You might remember that we reported last month that Gigabyte may possibly be preparing a non-reference variant of the GeForce GTX Titan? Well this seems to be it.

The WindForce 3x cooler on the GeForce GTX Titan is a robust new design which features three PWM controlled fans which push air towards a large central aluminum fin heatsink. Actually, if you look a bit closer, you would notice that there are two heatsink blocks, one on the GK110 GPU core and the other near the VRM and power phases. Both heatsinks are connected through a series of copper heat pipes that dissipate heat from one end to another allowing the fans to push the hot air out of the exhaust vents.

Gigabyte's GeForce GTX Titan WindForce 3x comes with a reference PCB featuring technologies such as Quad Way SLI and GPU Boost 2.0. It retains most of the basic specifications such as 2688 Cores and a 6 GB GDDR5 (384-bit) memory, clock speeds are a mystery for now but its obvious that Gigabyte won't just leave a card like this running at stock clocks. The WindForce 3x cooler is good enough to handle 450W of heat output so huge overclocks could easily be made. Display connectivity includes Dual DVI, HDMI and a display port and power is provided through 8 + 6 pin connectors.

Gigabyte didn't mention the price nor the availability of the GeForce GTX Titan WindForce 3x GPU. It would come at a premium price point though over the $1000 MSRP of the reference card. 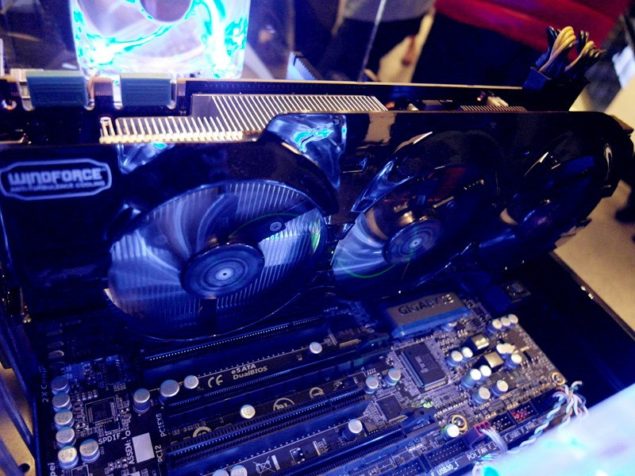