Looks like Videocardz has finally spilled the beans on the specs of the Maxwell Flagship, Geforce GTX 980. And its shaping up to validate the Chiphell leak we published a week ago. We can't release the die shot of the GPU for certain reasons this time, but if VCZ has posted this, you can be rest assured its true.

As you already know both cards were launching on the 19th of September, 12:01 AM PDT to be exact but the date has now been moved one day earlier to 18th September at 7:30 PM PST. While the GTX 970 is completely ready, Nvidia was having some trouble with custom GTX 980 cards so there is a slight possibility that Custom GTX 980s will be delayed. The Geforce GTX 980 has 16 Streaming Maxwell Multiprocessors (SMM) which in turn have 128 CUDA cores each, bringing the total to 2048.

Since the wattage of the GTX 970 is 148W, the 980 should have a maximum of 180W TDP, although the actual number should be less. With 2048 Maxwell cores we are looking at more or less GTX 780 Ti performance at decent clocks and more at high clocks. Which once again validates the Chiphell leak I mentioned above. Sadly for performance minded enthusiasts (myself included) this means that Nvidia is chasing power efficiency. This, in my personal opinion, should not factor much in a high end product. On the GTX 970 die, you can notice the nomenclature GM204-200-A1, and as VCZ reveals, the nomenclature for the GTX 980 die will be GM204-400-A1. Both the 970 and the 980 feature two 6 Pin connectors, 256Bit Bus and 224GB/s of bandwidth. The leak scene for this generation of Nvidia products appear to be drawing to a close, but there is still the big launch to look forward to. And ofcourse the curious case of the GM200 GPU.

Chinese Baidu forums are leaking so much information and material regarding the GeForce GTX 980 and GTX 970 graphics cards that they have started taking action against such threads by removing them. Over at the forums, someone posted a performance chart of the GeForce GTX 980 (Denoted by the Unknown-2 label to avoid getting removed from the forums) which shows gaming numbers in 2560x1440P with maxed out AA and AAF in several current generation titles such as Watch Dogs, Battlefield 4: Dragon's Teeth, Bioshock Infinite, ARMA III, Batman: Arkham Origins and Metro Redux. From the numbers, we can see that the GeForce GTX 980 delivers an average 60.8 FPS at minor overclock speeds in the titles compared to 57.9 FPS on the GTX 780 Ti and 54.4 FPS on the Radeon R9 290X. 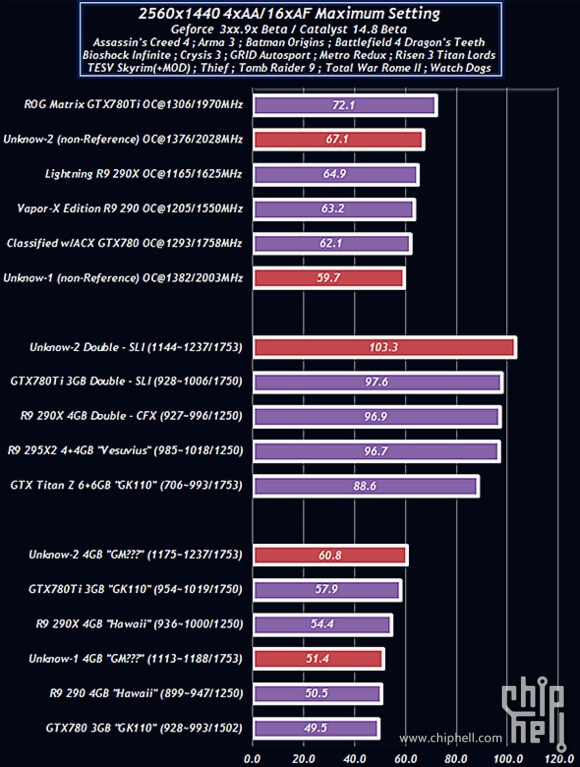