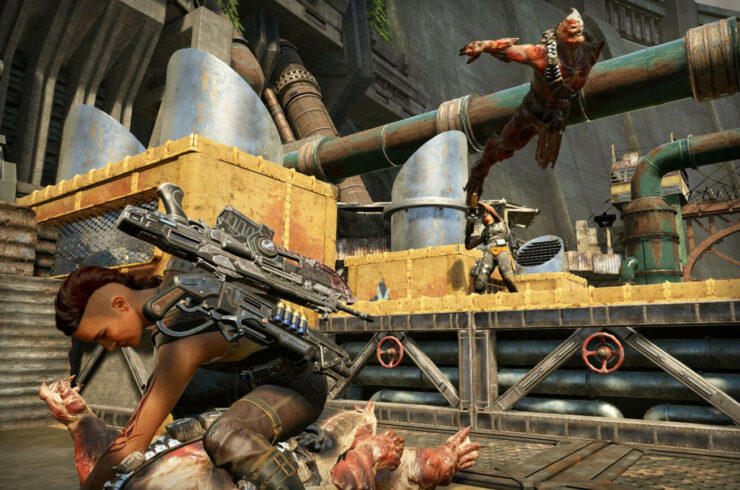 Gears Of War 4, the new entry of the series currently in development for PC and Xbox One by The Coalition, will finally release later this year, and fans have been dying to learn more about its features. Today, a brand new trailer featuring plenty of gameplay has surfaced online, finally allowing these fans to learn more about the highly anticipated game.

The new Gears Of War 4 trailer, which can be watched right below, features gameplay sequences taken from the main campaign.

In this short gameplay demo of Gears of War 4, our heroes JD, Del, Kait and Marcus Fenix are in pursuit of creatures called the Swarm. With their village destroyed and Kait’s mom abducted, the squad gives chase through the wilds of Sera and must battle through an incredible storm.

The new Gears of War 4 trailer is just the beginning for fans of the game this week. It's been confirmed today that the game will be playable at the Xbox booth at San Diego Comic-Con this weekend. Also, a panel focused on the game will be held tomorrow, July 21st, from 2:15 PM to 3:15 PM PT.

On a related note, Microsoft released yet another new trailer today, finally confirming the rumored Gears of War 4 Xbox One S 2TB Limited Edition, which launches alongside the game on October 11th. For the price of $499, customers will be getting a crimson red Xbox One console, a Crimson Omen limited edition Xbox Wireless Controller and a download code for both the Xbox One and PC versions of the game.

Gears of War 4 launches on October 11st on Xbox One and PC in all regions. We will keep you updated on the game by The Coalition as soon as more comes in on it, so stay tuned for all the latest news.