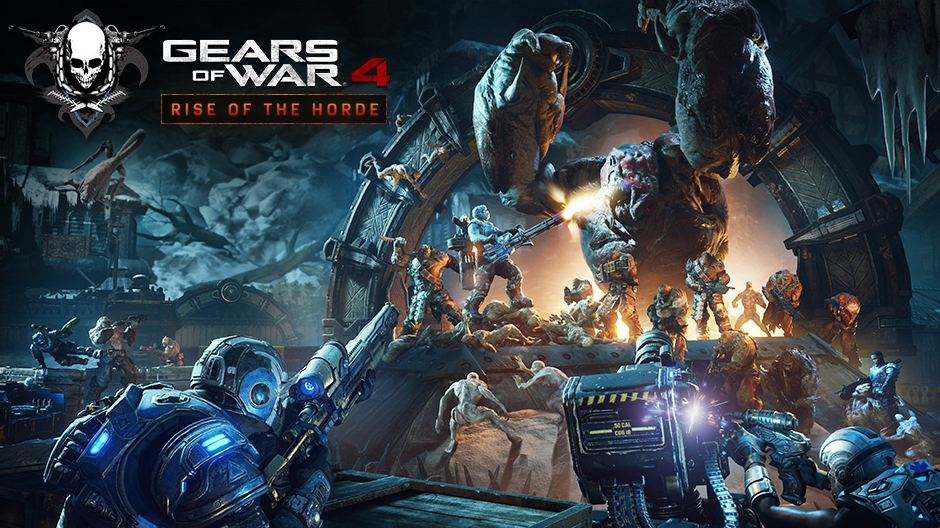 The Coalition revealed Rise of the Horde, the next and biggest update coming to Gears of War 4 soon. As you can easily guess from the update's name, it's mainly focused on expanding the Horde cooperative mode, but there's plenty more to be excited for all Gears of War 4 players and even for newcomers.

In fact, a free trial has been announced for both Windows 10 and Xbox gamers starting on June 9th and ending on June 15th. Rise of the Horde also adds 500G of Achievements, introduces two harder difficulty modes, adds two new maps (one from Gears of War 2 and one from Gears of War 3) and even optional ranked crossplay between the platforms.

You can find the update's full rundown and official trailer below. As a reminder, here's our review of the game.

Horde is getting a massive shakeup with the arrival of Rise of the Horde, with 15 brand new Horde Skills (3 per Class) to collect, Level 6 skills, Loot Drops, tuning changes and new difficulty levels!

Both the new and existing Skills can now be taken to Level 6, making them even stronger than ever before! The new 15 skills arriving in Rise of the Horde focus on providing new ways to specialize the way you play your Class.

Take those new Skills out into the field and defeat Bosses in Horde Matchmaking for new rewards – each Boss Wave you defeat at Wave 30, 40 and 50 will drop a singular random Horde Skill. Harder difficulties increase the likelihood of a rare drop, so challenge yourself for the best chance at an awesome drop.

We've also now added a new UI feature that now shows how many Power drops - and how much they are worth - are left on the field. While this benefits the whole team, Scouts can now rest safely at the end of the round knowing they cleaned up every possible Power drop out going into the next Wave.

We also have some exciting news to share for Xbox One and Windows 10 gamers who haven’t jumped in to the Gears of War 4 experience yet. Beginning on June 9th and running until June 15th, we’re offering a limited time trial version of Gears of War 4 to download for free!
This full game trial will offer 10 hours of free play in Gears of War 4, including the entire first Act of the Campaign plus full  - yes, full! - access to the Horde and Versus experiences. That means you can try out Rise of the Horde on top of all the great content that exists in Gears of War 4 today! And, if you don't complete the Trial during it's availability period, you can still play to your 10 hour time limit anytime afterwards.
For our new players, we’ll be offering special bonuses to earn as you level up including guaranteed characters, weapon skins and new Horde Skills to try.

With new and improved skills also comes tougher challenges. Prepare to take on the toughest fight in Gears of War history with the new Inconceivable difficulty level, coming to both Campaign and Horde.

In Horde, Inconceivable is a direct step up from Insane – you’ll be even weaker, and your enemies will be even stronger. Level up your skills to their new Level 6 peak and maximize the bonuses of your classes if you want to get through all 50 Waves of Inconceivable. Unlock Inconceivable Difficulty for Horde by beating 50 consecutive waves of Insane.
In Campaign, Inconceivable takes a more Survival based twist, giving you less health than Insane difficulty but also less health to your enemies. That’s because surviving on Inconceivable is all about effectiveness - weapons and crates drop significantly less ammunition, so you’ll have to make every shot count with whatever pickups you can find on the battlefield. Unlock Inconceivable Difficulty for Campaign by beating the Campaign on Insane.
In addition, Ironman Mode comes to both Horde and Campaign with Rise of the Horde. Ironman means one simple thing – don’t die. In Campaign, one death will restart your game back to square one. In Horde, no COG tags will be dropped when you die and one failed wave spells the end of your run to Wave 50.
You can toggle Ironman on any difficulty that suits you, and there’s some achievements out there to chase for fans willing to take on the ultimate high risk challenge! Plus, exclusive to Horde, Ironman adds a 5% XP bonus for all XP earned and XP Bounties completed during the match.

20 new achievements are set to arrive with Rise of the Horde, offering an extra 500G total Gamerscore to collect in Gears of War 4!

This month brings the highly demanded return of Avalanche, along with the close quarters combat of Rust Lung!

Xbox One and Windows 10 unite! We’re incredibly excited to enable Crossplay in Ranked Play beginning on June 6th, bringing Xbox and Windows players together in the battle to earn the highest rank possible.

For players who want to preserve the competitive spirit of console play, where all opponents run on similar hardware with similar equipment, we’ve added a Crossplay Toggle to enable Xbox One players to choose whether or not to match with players on Windows 10.

THE RETURN OF WINGS

Gears of War has always been home to some of the most hardcore gamers out there, and Gears of War 4 has proved no different. More and more players have hit Re-Up 10 over the last few months, so we wanted to add even more for players to earn as they play Gears 4.

Today, we’re announcing that Wings – the iconic symbols of the ultimate dedication to Gears of War – are making a comeback with Rise of the Horde!

Five new Wings levels await once you crest the initial 10 Re-Ups, with each Wings Level taking longer than the one before it. Exclusively for Wings 1-5, we’ve added a Black Gold Starting Weapon Skin set to collect as you rank up. If you reach the ultimate Wings 5, you’ll collect the Wings Custom Lancer  – the only Custom Lancer skin in the game! We'll be revealing the new Wings Re-Up Icons and Black Gold Custom Lancer in the coming days.