Gears of War 4 Multiplayer Beta Dated, To Begin Next Month

We still don't know when Gears of War 4, the latest entry of the third person shooter series, will release in all regions, but fans of the series will soon be able to try out the game's multiplayer features thanks to the closed and open betas which will be held next month. 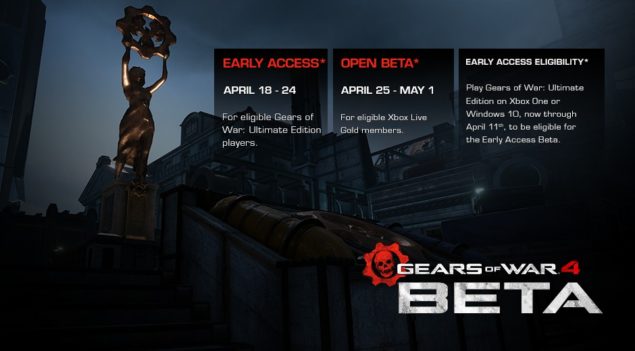 Earlier today, Microsoft has confirmed that the Gears of War 4 multiplayer beta will begin on Xbox One on April 18th. Players wanting to participate only have to play Gears of War Ultimate Edition on Xbox One by April 11th, and not by March 1st as originally revealed, with the first tokens for the multiplayer beta getting sent from April 18th. The beta will be in an "early access" state until April 24th, when it will be opened for all "eligible" Xbox Live Gold members. The testing period will end on May 1st.

There isn't much else that's known about the Gears of War 4 multiplayer beta as of now. As Microsoft has  only mentioned "eligible" Xbox Live members without elaborating further, the company will surely share more on the matter in the near future.

Gears of War 4 has only been confirmed for Xbox One, but it's been hinted that it might Windows 10 in the future. Last week, The Coalition's Studio Head Rod Fergusson, revealed that the game is "possibly" coming to the platform. Mr. Fergusson has also confirmed that Gears of War 4 will run at 1080P, 30FPS in single player mode and 60 FPS in multiplayer mode.

Gears of War 4 will launch on Xbox One on a yet to be confirmed 2016 release date. We will keep you updated on the game's multiplayer beta as soon as more is shared on the matter, so stay tuned for all the latest news on the next big Xbox One third person shooter.