A new gameplay mode for Gears of War 3 has been revealed, we are all familiar with Horde mode from Gears of War 2 which made COG players fight hordes of Locusts wave to wave but now the tables have turned and players can now play as Locusts and their objective would probably be to take down the "Hero" of the stage as shown in the video to win the round. Inside the video you will see Beast mode is a very diverse mode and let's you play as various Locust units. 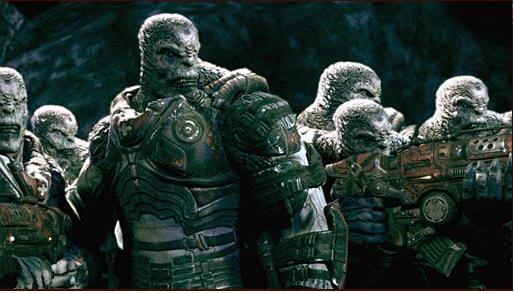 A new game mode for XBOX's upcoming exclusive Gears of War 3 has been revealed, the game mode is called "Beast Mode" this is the reverse of Gears of War 2's Horde mode where COG members had to fight waves of Locusts, but now it's the locust turn to hand out some pain.

The targets of Beast mode will be main story characters i.e the "Heroes" such as Marcus and Anya while you will have to fight your way through other COG soldiers to get to them, as the waves increase so will the number of Heroes to kill. If you notice in the video that the number of Heroes increases from Round 9 to Round 11. This will definitely be one of the newer game modes for XBOX LIve and I might add it does look very interesting and definitely worth playing.

The game is releasing in September which makes it a month of exclusive releases because Resistance 3 and Gears of War 3 will release in the same month.