This is your chance to unlock a limited edition multiplayer character by the name of Aaron Griffin who has been voiced by Ice-T all you have to do is like the Facebook page and in return you get a redeemable code you can use to unlock the exclusive character for when the game hits shelves later this year, this is a generous gesture from Epic and Microsoft and shows that you don't need to pre-order every game to get all the goodies some stuff just comes to those who wait, Hats off to you Epic and Microsoft. 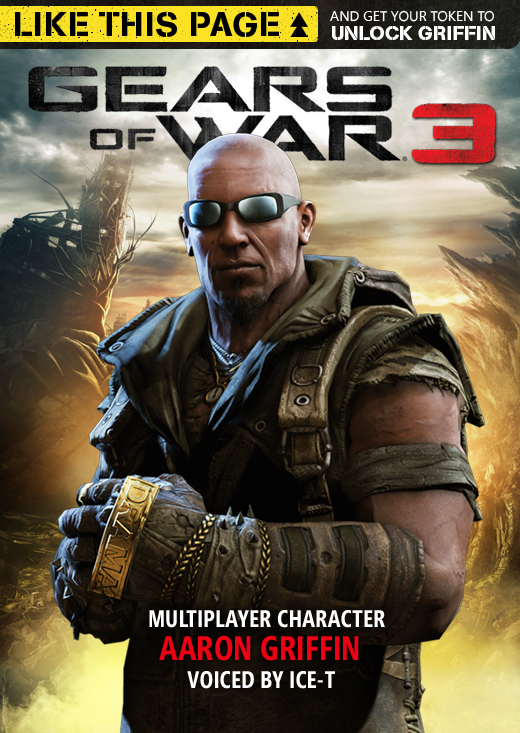 Aaron Griffin is a limited time offer for those of you who own an XBOX 360 and are looking forward to playing Gears of War 3 on the XBOX 360 later this year, the character has been voiced by Ice-T and is only only available as a multiplayer character normally to get an exclusive character one would have to pre order a game from a certain retailer like Game or GameStop to get an exclusive character / skin but it seems that Epic is throwing a bone to the community by giving all it's fans a free character to play as in Gears of War 3. The facebook page is indeed authentic and it does give you a redeemable code, the page will not ask for your email address or any other details all you have to do is press the like button followed by the "Get Code" button and your code should come to the screen.

Upon getting your code the page will also show you a recently made Horde 2.0 trailer "Five Against All" which you can also view here:

So what are all you XBOX Fans waiting for? Go and get your code right now.

The Link to the Facebook page is the source button below, just click on it and it will automatically redirect you the necessary page, and it goes without saying that a facebook account IS required for this procedure to work obviously