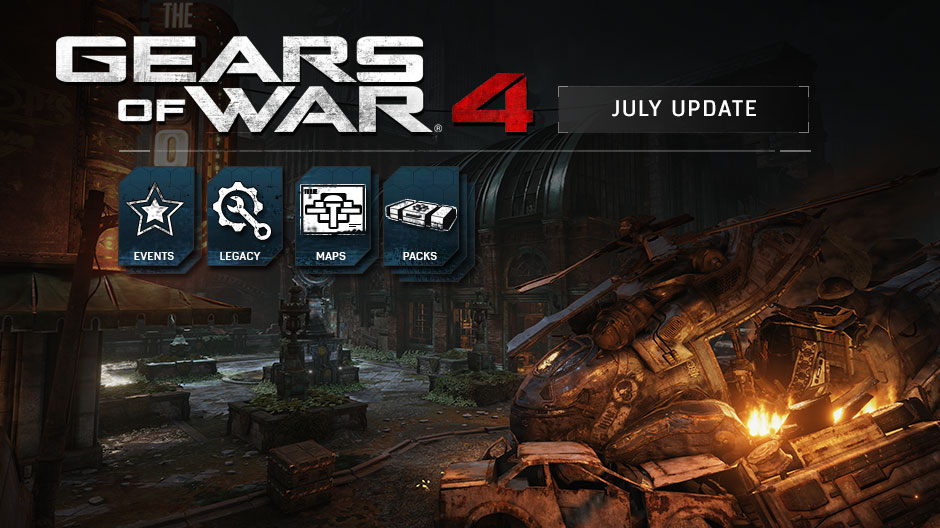 The Gears of War 4 update for July adds powerful windflares to the game’s multiplayer alongside Superstar Cole and new maps.

So far, windflares have only been available in the game’s campaign mode, but the July update adds these storms to Gears 4’s multiplayer mode as well. Windflares culminate in a stormwall with lightning bolts that can fry players in mere seconds.

Set on a tight intersection with a crashed King Raven in the middle, combat on this map is up close and personal – frags can help you to get an edge in combat, but this map is all about your core Gears combat skills.

The reclaimed Windflare map adds the windflare to the peaceful Reclaimed farm setting.

As you play in Versus and Horde, the Windflare will periodically roll into the map, challenging you to battle your enemies and the elements. You’ll need to master movement in the strong winds and judge your aim with projectile weapons well in the wind. As the stormwall hits, prepare to dodge lightning bolts that target players – look for the telltale sizzle to know when to move.

Superstar Cole will be also be added to the game through an upcoming Gear Pack this month. In addition, new events will be made available for players this month, including Raven Down 24/7.

Gears of War 4 is available now for Xbox One and Windows 10 PC. Rosh reviewed the game back at launch, rating it 9/10.

Gears of War 4 is a title I can see lasting a long time, an example of the power of the Xbox One and PC and a great game overall.