If you think about it, Gears of War 4 feels to be following in the same footsteps of Star Wars Episode VII: The Force Awakens. Introducing a new cast intrinsically linked to Delta squad, we’re led on a journey exploring some of the more familiar plot points of the series. With an older, wiser and more gravely Fenix leading the new team, we’re taken to a host of new locations built with the same impressive Gears of War aesthetic we’ve come to expect.

The first third of the campaign is arguably the weakest, with the game rushing to introduce the central characters and threats of Sera in peace time. And with the locust gone, you’ll be spending the first few hours battling against robotic foes, which is a bit odd for a Gears title. Built like a cross between a terminator and Jack, the friendly door ripping bot from the series roots, these DeeBee’s take no cover and instead stomp slowly towards you while spouting generic autonomous catchphrases.

Luckily the early stages of the campaign give way to the familiar appear of Gears of War; a small squad on an impossible and chainsaw-fueled adventure. Like earlier games this whirlwind tour of the fringes of COG controlled space captures beautiful tours of the countryside, grand gothic architecture as well as gritty industrial facilities, not to mention the essential underground caverns and organic landscapes to shoot through as well. All of this is beautifully rendered on the Xbox One and is at times, much like the original, breath-taking.

From here on out the gameplay is exactly what you’d expect of the series. Solid, beefy controls as you run up to, over and around cover in skirmishes against enemies’ guns, claws, and bigger guns. Gears of War 4 offers a unique and satisfying balance of deep strategy and simple controls that allow you to perform precision maneuvers, gunplay and brutal finishers. Bringing something new to the game, there is a collection of new weapons from extremely high powered ‘Overkill’ shotgun to the Dead Space reminiscent ‘Buzzkill’ power tool.

Battles between you and the Swarm play out slower than you might think if you haven’t played Gears of War in a while, offering you the chance to calculate your next move rather than simply reacting to enemies to the enemies in front of you. The AI for the enemies perhaps isn’t the most difficult to outsmart, but the sheer number and variety of enemy types helps keep you on your toes in all but the easiest difficulty setting. And like any Gears game, the campaign is by far the most enjoyable played with friends.

What is a little less enjoyable however is the inclusion of tower defense sections of the campaign. Considering that Gears of War introduced the gaming world to Horde mode in its sequel, the need to crowbar it into the story is unnecessary, with the game featuring a full standalone mode for fans to enjoy. Although there is nothing wrong with it in the campaign, it is arguably less fleshed out than the standalone mode and temporarily slows the already meandering narrative to a halt.

Playing Horde mode on its own, however, shows just how the father of the genre keeps it fresh. While so many games over the years tagged on a Horde mode in a futile attempt to appear replayable, Gears of War has been innovating the genre since they first created it, with Gears of War 4 being no exception.

Having already established the building of fortifications between waves in Gears of War 3, Gears of War 4 introduces something entirely new to the genre, classes. Broken up into five different classes, players select one that not only compliments their playstyle but the team composition as well. Although the new enemies offer some addition variation on the maps, including the Snatcher which can steal away downed comrades, it’s the classes that offer the most difference as they both limit and expand your choices within the game. For instance, the engineer is best suited to building and repairing fortifications, making it an essential choice, while the scout is exceptional at collecting vital supplies for the squad, forcing him beyond the front line. Snipers, Heavies and Soldiers, however, are best suited to defending the best need not explore so far.

Like with any good Horde mode, the most important part of the game is to play well with your allies. While it is possible to play alone, the thinly disguised grinding mechanics then becomes extremely boring and frustrating in equal measure. Playing with strangers can be something of a test of patience as other players experiment with the classes and their respective role. Friends, like brothers until the end, are the cornerstone of good fun in Gears of War 4 as you laugh in victory and defeat together.

This is just as true on the competitive modes as it ever was in the series. And like the previous titles, Gears of War 4 offers hundreds of hours of exciting and tense combat online. Proving much more difficult the less intelligent enemies of the campaign, online opponents offer the most intense and enjoyable experience Gears of War 4 has to offer.

Once again the game offers a slower experience with a focus on cover and flanking, but that doesn’t mean you can’t run into the mix with a Gnasher and have a lot of fun. Playing with a friend adds a great advantage, with coordinated assaults proving much more effective than lone wolves. With a dozen game modes, excellent weighty combat and weapons and some really well-designed maps filled with hidden routes and treacherous possibilities, Gears of War 4’s multiplayer is pretty much perfect and with no noticeable server issues on launch, it feels almost too good to be true.

Gears of War 4 came at an interesting time for Xbox, with the sales of the console already improving. While the series seemed to be on a decline with Gears of War: Judgement, Gears of War 4 might just be what it takes to come into its own once and for all. Gears of War 4 is a title I can see lasting a long time, an example of the power of the Xbox One and PC and a great game overall.

The game runs extremely well on both platforms. While the PC version can run the game (provided that you have the right hardware) at native 4K and 60FPS thanks to the great optimization we've covered earlier, the Xbox One S version sports a great implementation of HDR technology, though you'll need a proper HDR display to check out how good that looks. 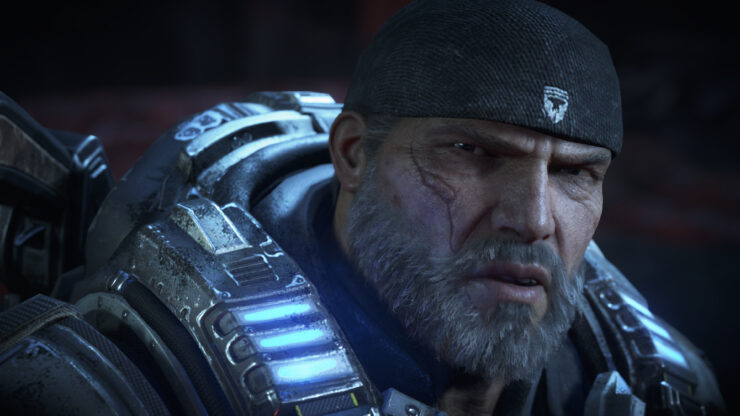