It has only been 2 days since Samsung unveiled their new display technologies based on OLED panels, and today, we are hearing that Samsung has filed a trademark titled Z Roll, which indicates that the company might be working on a new rollable smartphone called the Galaxy Z Roll; company's first rollable smartphone.

The tip is coming from our trusted friends over at LetsGoDigital, who have been sending us some interesting information about the upcoming Samsung devices and the company's trademarks, so it is interesting to see what the future might be holding.

Galaxy Z Roll Could be the First Proper Rollable Phone

Samsung has applied for the trademark at the European Union Intellectual Property Office (EUIPO), and the filing reveals some interesting detail. The first thing is the name which says "Z Roll," it has a Class 9 classification, which helps us point out that this is, in fact, a smartphone, and it might actually bring S-Pen support as well because it reads "Smartphones, Electronic pens for smartphones Mobile telephones; Telecommunication apparatus." You can check the filing below. 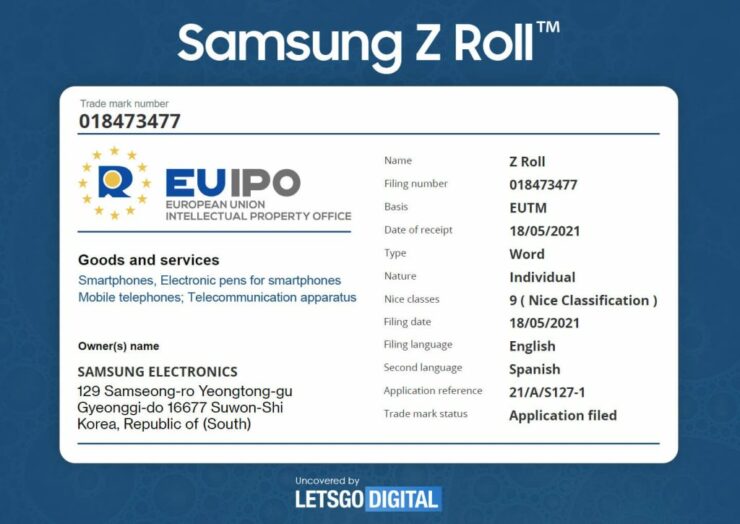 Breaking the name down, it is safe to say the "Roll" means that the smartphone will bring a roll-up display, and the "Z" is referring to the fact that the device will be a part of the Galaxy Z lineup. All of this has started to make sense that Samsung is using their Z lineup for all the experimental phones they are releasing. The Galaxy Z Roll will be joining the Galaxy Z Fold and Galaxy Z Flip, and possibly a Galaxy Z Tab.

We are not sure when Samsung will be releasing the Galaxy Z Roll or even announcing it. We expect the Galaxy Z Flip 3 and Galaxy Z Fold 3 to be official in August, later this year. Samsung might tease the rollable device at the same event, followed by a later release, but at the time, it is not confirmed. We will keep you posted as the story develops.