Only yesterday, we shared the news with you that the next Galaxy S series phone will be replacing the Galaxy Note series altogether, and at that time, there was not much information shared with us. However, the same tipster has shared more information that makes a lot more sense, and well, if you have been waiting for the Galaxy Note series, then this might not be good news for you. The latest tip claims that the Galaxy S22 Ultra will be the phone to replace the Note series.

According to Ice Universe, Samsung could be aiming to have the Galaxy S Ultra devices take on the Note crown, but in a much better way. Sure, the Galaxy S21 Ultra and the Galaxy Z Fold 3 did sate the itch by having S Pen support; both felt incomplete implementation since they lacked a slot. However, this will change as the leak suggests that the Galaxy S22 Ultra could have an integrated S Pen slot. Just like the previous Note devices have had.

Now, again, this is a rumor, so we would prefer taking it with a grain of salt, but the tipster in question has given us some reliable leaks in the past. 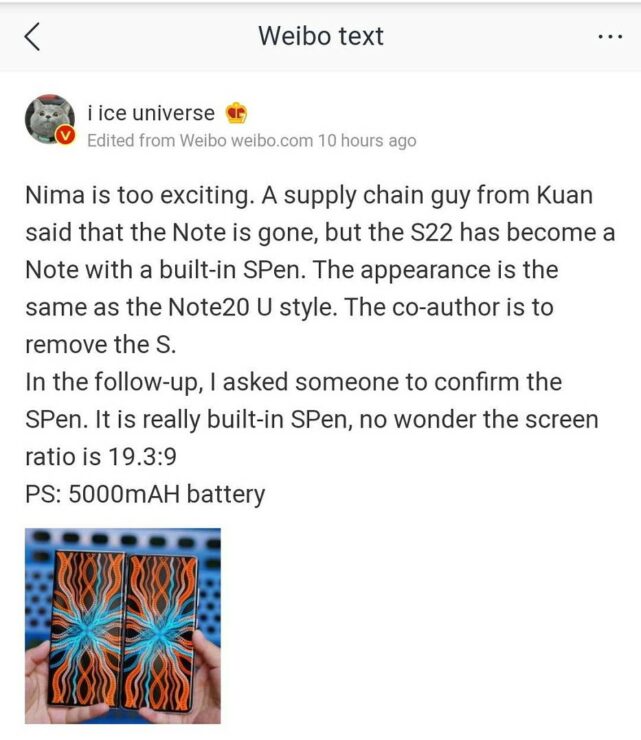 This new change will change the aspect ratio as well, with the phone expected to have a 19.3:9 ratio for the Galaxy S22 Ultra; the battery is said to be 5,000 mAh, but this is more than likely for the Ultra variant. The tip also suggests that Samsung is also planning on releasing the S suffix altogether. If that is the case, I am not sure what Samsung will plan on going with instead.

There is more evidence to suggest that Samsung may have killed the Galaxy Note altogether. I recently supported that Samsung is selling a Galaxy Z Fold3 Note Package. It comes with an S Pen, a folio case with the S Pen slot, and charging brick. Not to mention, having two of the most premium phones ship with S Pen support and then releasing another premium device with the same feature set would make a lot less sense.

However, leaks and rumors are just one side of the story. We never really know what is going to happen until we hear from Samsung. But if this is the case, we might see some exciting new devices in the future. Stay tuned for more.