The Galaxy S21 family is nearing its launch as we keep hearing more and more about the devices every day. Yesterday, Samsung's official promo reels got leaked, showing all three devices in different colorways and confirming a lot of our doubts as well. We also confirm that these phones will not be shipping with any charger or earphones in the box.

However, the latest bit of information that we have our hands on points towards the fact that the Galaxy S21 series is, in fact, going to launch with the Snapdragon 888, at least in some regions. When Qualcomm officially announced the Snapdragon 888, Samsung was missing from the companies that will be releasing a phone with the new chip. Still, it seems that is not going to happen since the FCC certification proves otherwise.

Snapdragon 888 Will be Found in the Galaxy S21 in the U.S. and a Few Other Regions

The confirmation is coming in the shape of an FCC certification, which reveals more than just the fact that you are getting Snapdragon 888 under the hood. You can look at the certification below. 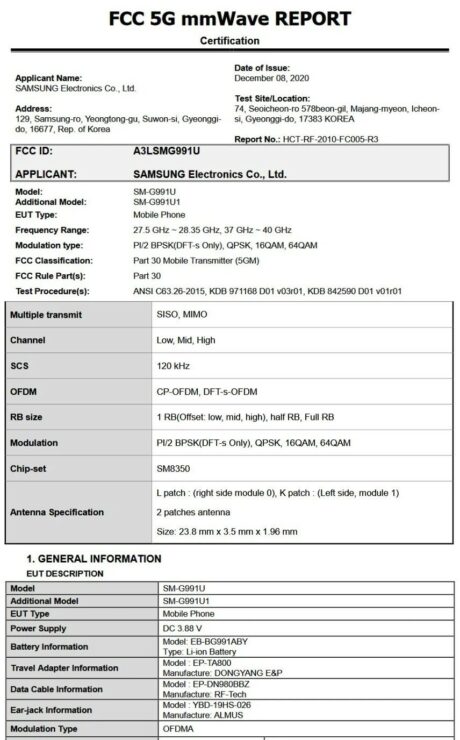 The documentation points towards the device using an SM8350 chipset, which is essentially a codename for the Snapdragon 888. So, you are getting that variant in some markets, whereas the other markets will get the Exynos 2100 variants, and we are looking forward to seeing how both of these are going to compare against each other.

In addition to that, the certification also reveals that the Galaxy S21 is going to feature mmWave 5G, Wi-Fi 6, Bluetooth 5.0, NFC, and 9W reverse wireless charging. The Galaxy S21's battery is also mentioned; however, the document does not contain the capacity. But a previous leak reveals that it will have a 4,000 mAh battery.

The interesting bit here is that the FCC certification also confirms the charger with model number EP-TA800. Still, we cannot be sure whether Samsung will include the charger in the box because a previous report indicates that it is not going to be happening.

Whatever the case might happen, the alleged date for an official announcement is 14th January 2021, so we are excited to see what Samsung has in stores for us.