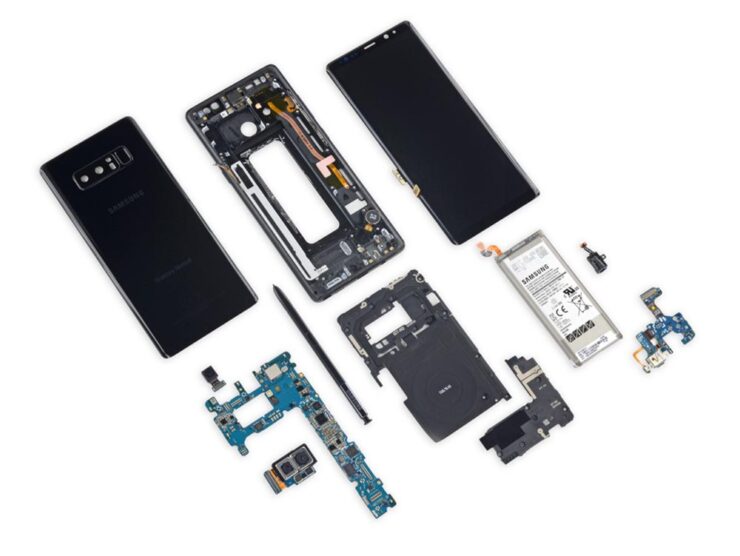 Samsung’s latest Galaxy Note 8 is now well known for its well-built exterior and high durability, but how easy would it be for professionals to open up the phone to replace a crucial component? Well, it is not particularly difficult, as summarized by the latest teardown findings.

Since both the front and back of the phone is covered by Gorilla Glass 5, iFixit professionals had to be extremely careful when popping open the display of the Note 8.

Using a lot of picks and a heat gun to soften the adhesive holding down the display to the other side of the device, this part would be regarded as fairly simple, but it is far from that. Remember, the IP68 water-resistance rating of the Galaxy Note 8 will be compromised if you tore down the phone yourself so only do it when it is absolutely necessary.

If you have multiple screws present in your kit, you will need just one head because the only screws that hold the phone together are standard Philips screws. This will surely prevent repair professionals from wasting time by switching between screw heads continuously.

The 3,300mAh battery is removable if you are able to access the innards, but because there is a lot of adhesive holding the cell in position, you will have to take extra precautions not to puncture the battery and wreaking havoc on the rest of the components.

The Type-C USB port, fortunately, can be removed from the daughterboard, making it much easier to replace for when you have a charging problem at hand.

iFixit also managed to summarize its findings below, highlighting what made it give the Galaxy Note 8 a repairability score of 4/10.

Many components, including all of those that experience wear, are modular and can be replaced independently.

The only screws in this phone are standard Phillips screws.

The battery can be replaced, but tough adhesive and a glued-on rear panel make it unnecessarily difficult.

All repairs require removing the glass rear panel, which is challenging due to the large amount of adhesive.

Replacing the display requires removing the glass rear panel and the display, both of which are fragile and secured with strong adhesive.

For a flagship that is oozing with a metal and glass exterior, the Note 8 was surprisingly easy to open, if you can get through the challenging part of separating the display from the rest of the phone.