Well well well. Even though Samsung is yet to launch the Galaxy Note 5 later this year, looks like case manufacturers are ready to get their products out of the door beforehand now. We've started to see an increasing number of Galaxy Note 5 case leaks over the past couple of days, and courtesy of the renders that they come alongside, we've also managed to unearth quite a lot about the device. Today, some more case renders depicting Samsung's flagship phablet have surfaced, so take a look below at what the Galaxy Note 5 can be expected to come with. 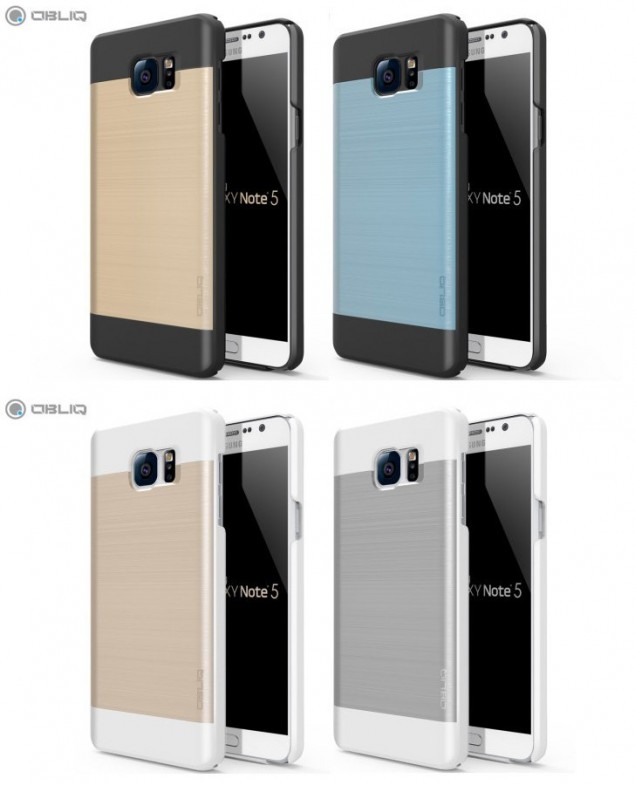 You can take a look above at Obliq's depictions for the Galaxy Note 5. Aside from some sensor changes, details shown by the images resemble what we've been telling you so far. You can take a look at the home button, the volume buttons and the power buttons on Samsung's upcoming phablet. It won't be too long until we get to take a final look at the Samsung Galaxy Note 5 since Samsung's been rumored by several quarters now to set a launch date of August 12 for the Galaxy Note 4. The device is also rumored to be coming with 4GB of RAM on board, coupled with a one of a kind Exynos 7422 SoC under the hood, which should prove sufficient for most users.

As can be seen above, the cases come with five color options, to cover a variety of tastes. Samsung's Galaxy Note 5 is expected to further boost the manufacturer's strong start for 2015 with the launch of the Galaxy S6 Duo earlier this year. Samsung's also expected to launch a Galaxy S6 Edge Plus in the coming months, which will most likely be featuring Qualcomm's Snapdragon 808 on board, patching things up between the US chipmaking giant and the Korean electronics manufacturer. All in all, a good couple of months are in store for Samsung fans all around and we'll be updating you as things develop. Stay tuned and let us know what you think in the comments section below.