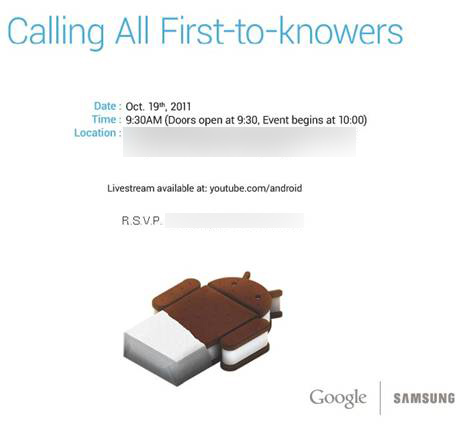 The second most anticipated smartphone this fall, after the iPhone 4S is ofcourse the third generation Nexus smartphone, the Nexus Prime. The device was supposed to be unveiled at "Samsung Mobile Unpacked Event 2011" on October 11th in San Diego but the launch was delayed due to the unfortunate death of Apple's legendary CEO, Steve Jobs. Samsung has now  sent out invites for the event and it scheduled for the 19th of October at 10:00 am in Hong Kong.

Althought there is no mention that the Nexus Prime/ Galaxy Nexus will be unveiled at this event, all the clues point towards it. First off, we know that Google launched the Nexus S to commemorate the launch of Android Gingerbread, so its only logical that Ice Cream Sandwich's launch should be celebrated with another Google phone.

We also know that Samsung has already shown us a teaser of a curved smartphone in a previous video on their Youtube channel and it is obvious from the curved shape, that it is indeed the Nexus Prime.

The event is on October 19th and will be broadcast on Youtube HERE.