We’ve all heard great things about Galaxy A9, and despite belonging to the mid-ranged category, the handset is able to bring a lot more to the table compared to the rest of competition pitted inside the mid-ranged smartphone ring. Let us see what benchmarking scores this device is able to obtain.

According to a Chinese source, Galaxy A9 is able to score phenomenally in the popular benchmarking application AnTuTu. The specifications and the score obtained have been detailed in the images below, so you be the judge if Samsung has finally come through in providing the public with the ideal mid-ranged handset that features an impressive price/performance ratio. Starting off, Galaxy A9 features Qualcomm’s Snapdragon 652, which we detailed earlier, is running the following octa-core configuration:

There is also an Adreno 510 GPU present that will be responsible for the graphics side of things, but before we get to the official AnTuTu scores, we would like to point out that Galaxy A9 is stacked with specifications that would make it seem more like it belongs in the high-end category. From a 4,000mAh battery to a rear camera sensor that can record 4K videos, the 6 inch cellular behemoth does more than its fair share of delivering performance and battery life to users who display a very strong affinity towards Samsung’s array of mobile products. 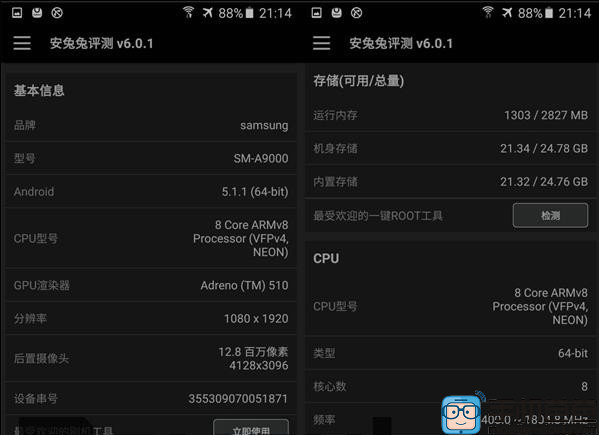 Now, coming to the actual benchmarks, you will be able to see them in the image below. According to the results, Galaxy A9 is able to score an astounding 73,592 points in the application, putting it just a few thousand points away from the likes of current generation flagship smartphones such as Xperia Z5 and One M9, which are both running a Snapdragon 810. This goes to show how far Qualcomm has come with its next-generation mid-ranged chipsets and despite the fact that they have been manufactured on the 28nm node, they still deliver astounding levels of performance. 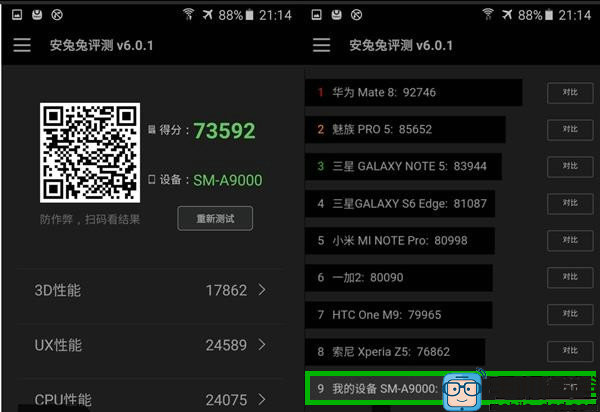 Other specification details of the handset include 3GB of RAM, and a Lollipop 5.1.1 update. The disappointing aspect of the device is that it is running an older version of Google’s mobile platform, but we are confident that a mid-ranged offering that delivers performance at this magnitude will obviously be a part of those mobile devices that will receive a Marshmallow 6.0 update. If Samsung is able to keep a hold on its pricing strategy, then Galaxy A9 will easily be able to penetrate the mid-tier smartphone market. After all, it is not every day that you get to witness such a powerhouse of a mobile phone.