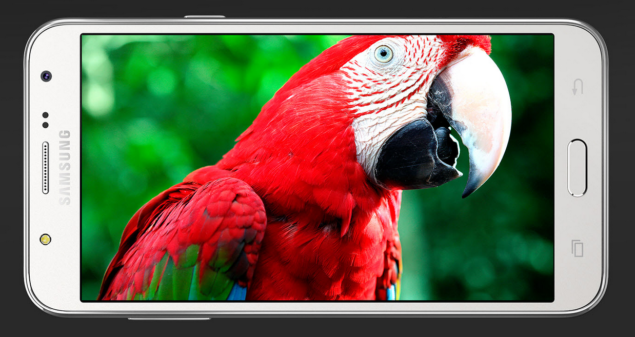 According to a source, Galaxy A9 is going to be running Qualcomm’s Snapdragon 620 SoC. While it might not be as capable as the 14nm FinFET Snapdragon 820, the upcoming chipset will still be able to deliver a lot of punch thanks to possessing Cortex-A72 cores. In fact, the last benchmarking leak that we covered of the chipset showed that it was able to beat both Exynos 7420 and Snapdragon 810 in Geekbench’s single-core test, although it was unable to replicate the results in the multi-core test results.

Regardless, we can now expect what the kind of performance we will be experiencing from Galaxy A9. Additional specifications uncovered report that the device is going to sport a phablet sized form factor thanks to its 5.5 inch screen size and it is also going to be radiating a resolution of 1080p, which is impressive to see from a smartphone that is apparently going to belong to the mid-ranged category.

Moreover, Galaxy A9 is also going to be incorporated with the same amount of RAM that is present in the company’s previous flagship smartphone, Galaxy S6, which brings the grand total to 3GB. That’s not all, but internal memory is going to be 32GB, and we are hoping that the South Korean tech giant is going to provide a MicroSD card slot feature as well. The only disappointing thing about Galaxy A9 is that it is going to be running Android Lollipop 5.1.1 when it is officially released.

For a smartphone that is going to be released in the near future, any device, high-end or mid-ranged not running Android Marshmallow 6.0 will result in a serious deal breaker for consumers. The pricing details of the smartphone are currently unknown, but we did manage to get our hands on the AnTuTu benchmarking score, which is quite impressive, as you can see for yourself. If Samsung is able to price the smartphone accordingly, may be Galaxy A9 will become a popular product in the market. 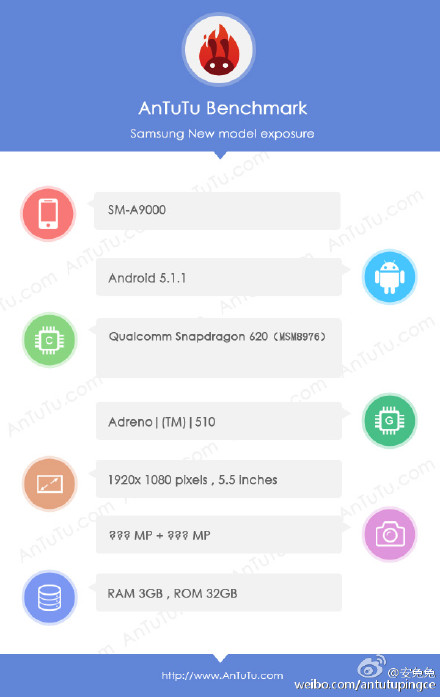 What do you guys think? Does Galaxy A9 feature hardware that will effectively allow it to be positioned as a competitive smartphone for the mid-ranged category? Let us know your thoughts. 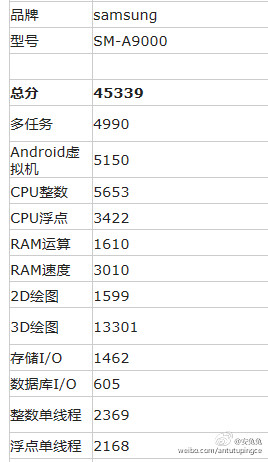