Flip phones are long gone, and have been replaced by smartphones and non-flip, statically designed mobile devices. But if you've ever been to Japan, then you'll realize that flip phones aren't dead at all, in fact, users actually want one still. As crazy as it may sound, manufacturers like Samsung and LG are creating flip phones to cater to public demand, while other companies such as Apple have digested the fact that the era of flip phones is long gone. In fact, the Cupertino giant was the one playing a swift hand at putting to rest the almighty flip phone, but what if Apple actually made a flip phone itself? What would it look like? 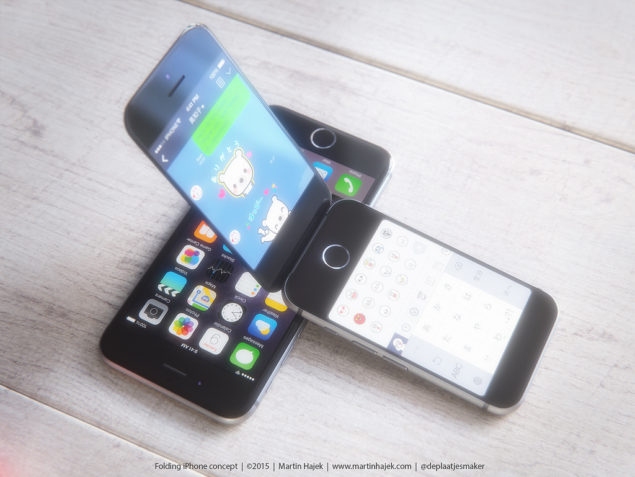 Resident designer Martin Hajek thought about the same thing - what if Apple made a flip iPhone - and conjured up a beautiful concept of a device if it was designed by Cupertino itself. While flip phones of yesteryear were clunky with small displays, Hajek's concept actually makes the design more appealing, and we're not saying this because it has an Apple logo slapped onto it.

Instead of a keyboard, the designer of the concept has opted to go for a touch-screen display, obviously. So basically, the Apple flip iPhone 6 features three displays in total: one in place of the keyboard, one as the primary panel and one on the outside to view notifications and calls.

The designer went for an iPhone 6 like design, and the handset even features a Home button outside of the flip top. And to top things off, the handset is available in three colors: space gray, silver and gold while also coming packed with an iPod touch like loop accessory.

The idea of Apple ever making a flip phone is outrageous itself, mainly because the company takes pride in its simple yet elegant design when it comes to forging hardware. And a flip phone is a complicated mobile device that can never ever look elegant as a statically designed piece of hardware, such as an iPhone or the countless number of droids out there.

But hey, we have a good concept to look at and the designer has wonderful job at it, so let's not get carried away into the details whether or not Apple would make the device ever or not from our end.

Do you like the concept flip iPhone 6? Then do let us know in the comments section below. And while you're at it, be sure to toss in your opinion regarding whether or not Apple should make a flip iPhone going forward.