With nearly every major Android manufacturer having rolled out its flagship device for the year, you'd think that we'd we done with flagships for now. But even though Sony, LG, HTC and Samsung might be the big players in the industry, we've seen several manufacturers capture user attention with their devices as well. One of these (no pun intended) is OnePlus, who managed to gather a nice little following with its first device, the OnePlus One. Well, we might be getting to see a new device from the Chinese manufacturer this month. 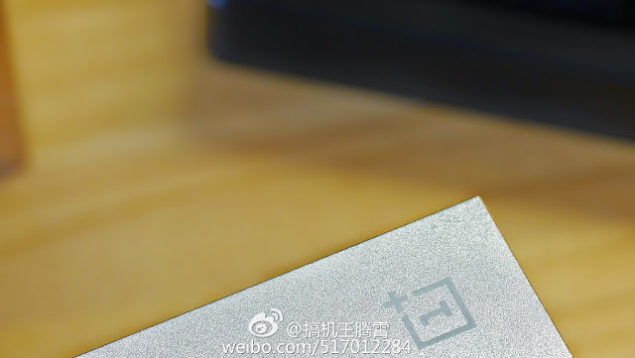 While the OnePlus One was a warmly received device, its been a while since we've heard any news for the manufacturer's plans for a device successor. After all, at the rate updates occur in the smartphone industry, devices get updated regularly at a yearly basis. OnePlus is launching its Hydrogen OS on the 28th of this month. Hydrogen OS will be based on Android Lollipop in terms of major features and other specifications. But OnePlus' upcoming event might end up having a surprise for us all.

A mysterious image has surfaced on the Chinese Weibo today that shows a box belonging to the manufacturer. The box appears to be rather simplistic in nature and could point towards a metallic device from OnePlus. Metal devices have become an increasing trend in the smartphone world these days, and if you want to be successful as a manufacturer in the Android world then you're going to have to involve the premium building material in your device one way or the other. Today's image makes for some interesting speculation, as OnePlus should hurry up and launch its next device as soon as it can. Thoughts? Let us know what you think in the comments section.