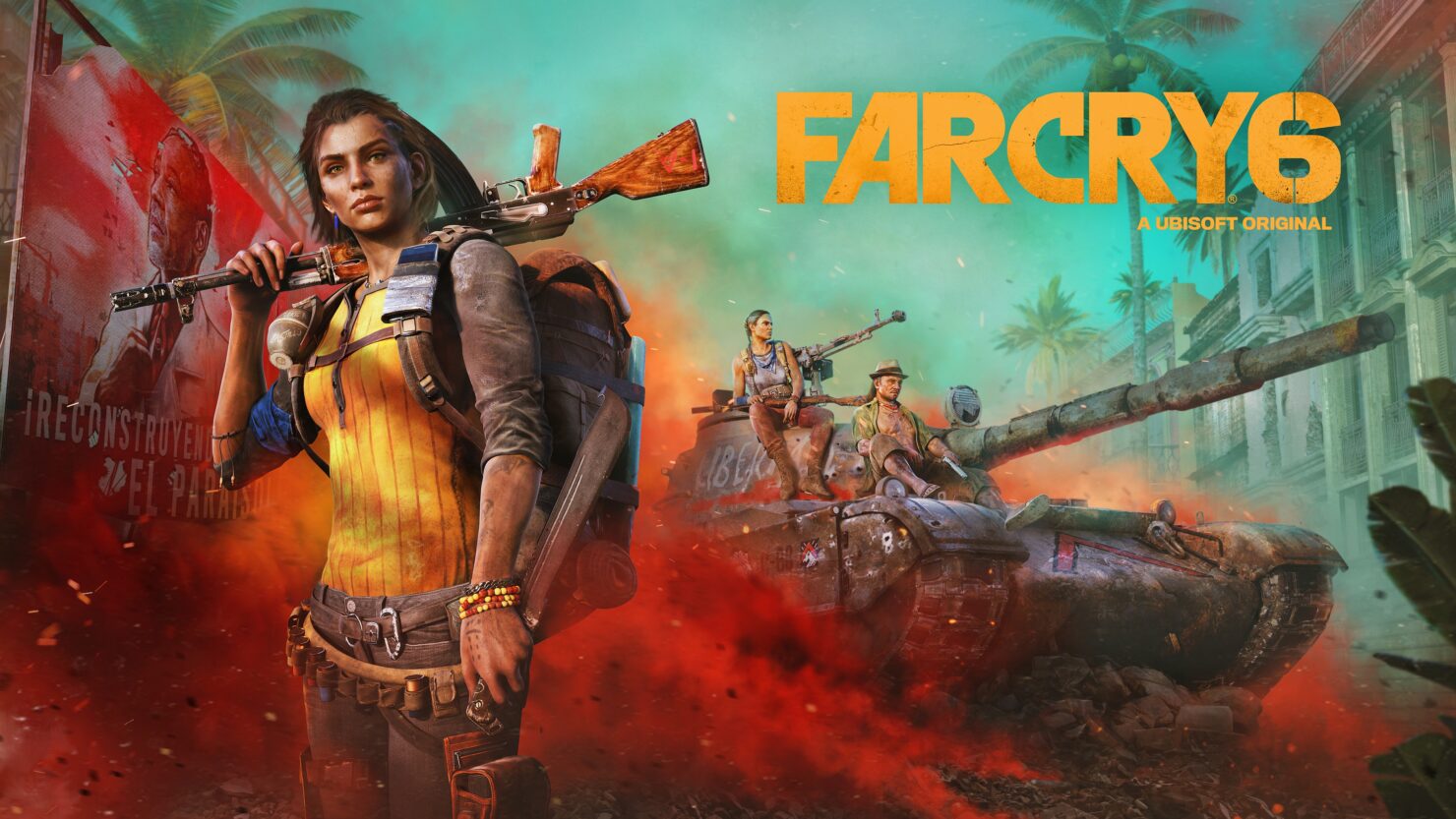 Far Cry 6 may have slipped slightly from its original launch date of February 18th, but fans of the open world first-person shooter franchise need not worry at all, as a recent presentation showed us that the game is on track to be the most ambitious Far Cry title yet.

Far Cry 6 will allow fans to pick the gender of main character Dani Rojas, a no-nonsense military dropout who begins as someone who'd rather not have anything at all to do with the regime of Antón Castillo (played by the great Giancarlo Esposito) or the brewing revolution. Eventually, though, Dani will be forced to realize there is no other way but to confront Antón head-on.

The main character will be voiced this time around, with Nisa Gunduz (Designated Survivor) and Sean Rey (Rev, Hemlock Grove) confirmed as the official voice actors of Dani Rojas. We were also introduced to two key figures that will be on Dani's side: Clara Garcia, leader of the Libertad movement, played by Jess Salgueiro (The Boys, The Expanse, Jupiter's Legacy); and Juan Cortez, a so-called guerrilla spymaster, who'll be played by Alex Fernandez (True Detective, American Crime Story, Runaways, Bosch).

Garcia will ask Dani to unite the guerrilla movement so that the people may finally fight back against the regime, while Cortez will instruct Dani on how to successfully employ guerrilla tactics to achieve the revolution's goals.

To begin with, a revolution against a dictator's regime isn't made in the open. Hubs in Far Cry 6 are located in the hidden Guerrilla Camps, where most mission givers can be found and Dani can chill a bit by doing some polygon-like shooting and what looked like mini-games.

Far Cry 6 also features weapon holstering, a new mechanics that will help Dani blend into the crowd as long as he or she doesn't get too close to regime forces. Additionally, Guerrilla Paths (which the in-game lore dates back to the prior 1969 revolution) can be used to move across the island without risking detection from Antón's military. 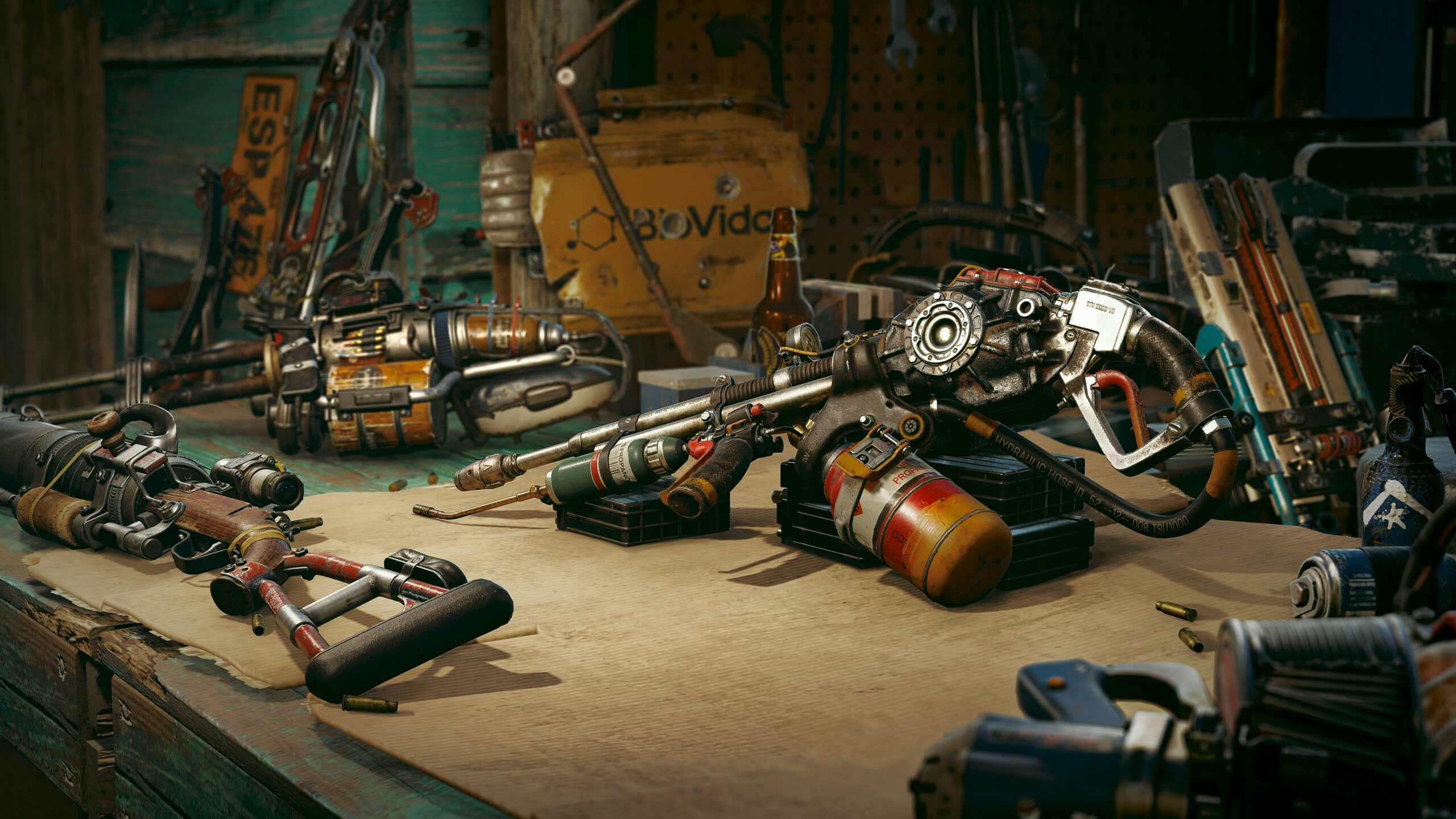 The most important lesson coming from Juan Cortez is one rooted in reality, though. It's not a secret that Cuba heavily inspired the fictional island of Yara, and it only made sense for Ubisoft to use the Cubans' renowned resolver philosophy. This means finding uses for absolutely every single thing in a pure DIY fashion. Some of the most outlandish weapons we've seen in the Far Cry 6 presentation were powered by sardine cans, old motorcycle engines, and even CD-ROMs that play 'Macarena'. Supremo backpacks are the pinnacle of the resolver philosophy, enabling Dani to really become a one-guerrilla-army for a short amount of time and fight back with flamethrowers, rocket launchers, and other high-impact weapons whenever the situation is dire enough to warrant it. If you prefer the stealth approach, though, classic tools like throwing knives and sticky EMP grenades will still prove very useful.

Resolver also applies to vehicles. The so-called 'Guerrilla Rides' in this game will be entirely customizable and can be delivered almost anywhere in Yara for your convenience. Of course, you can also hijack almost every type of vehicle, from tanks to planes, boats, and horses.

Player's choice has always been a staple of Far Cry, and this sixth mainline installment pushes it to the next level. In Far Cry 6, every piece of equipment can meaningfully impact what Dani Rojas can do. In fact, perks are directly tied to the gear (head, chest, hands, legs, and feet). In the developer's example, using a marksman's goggles would improve headshot damage while vests, pants, and shoes enhanced Dani's stealth and mobility, and a special type of gloves would ensure throwing knives won't miss.

With 49 fully customizable military-grade weapons, Far Cry 6 will also sport the largest roster of weapons in the franchise yet. These can be customized, too, through attachments like scopes, silencers, and laser pointers.

Speaking of the tools available to players, we got a brief glimpse at two of Far Cry 6's animal companions, the Amigos Guapo (an alligator) and the little but incredibly cute dachshund dog Chorizo. Each companion will have its own characteristics, though we didn't quite get a precise overview yet. 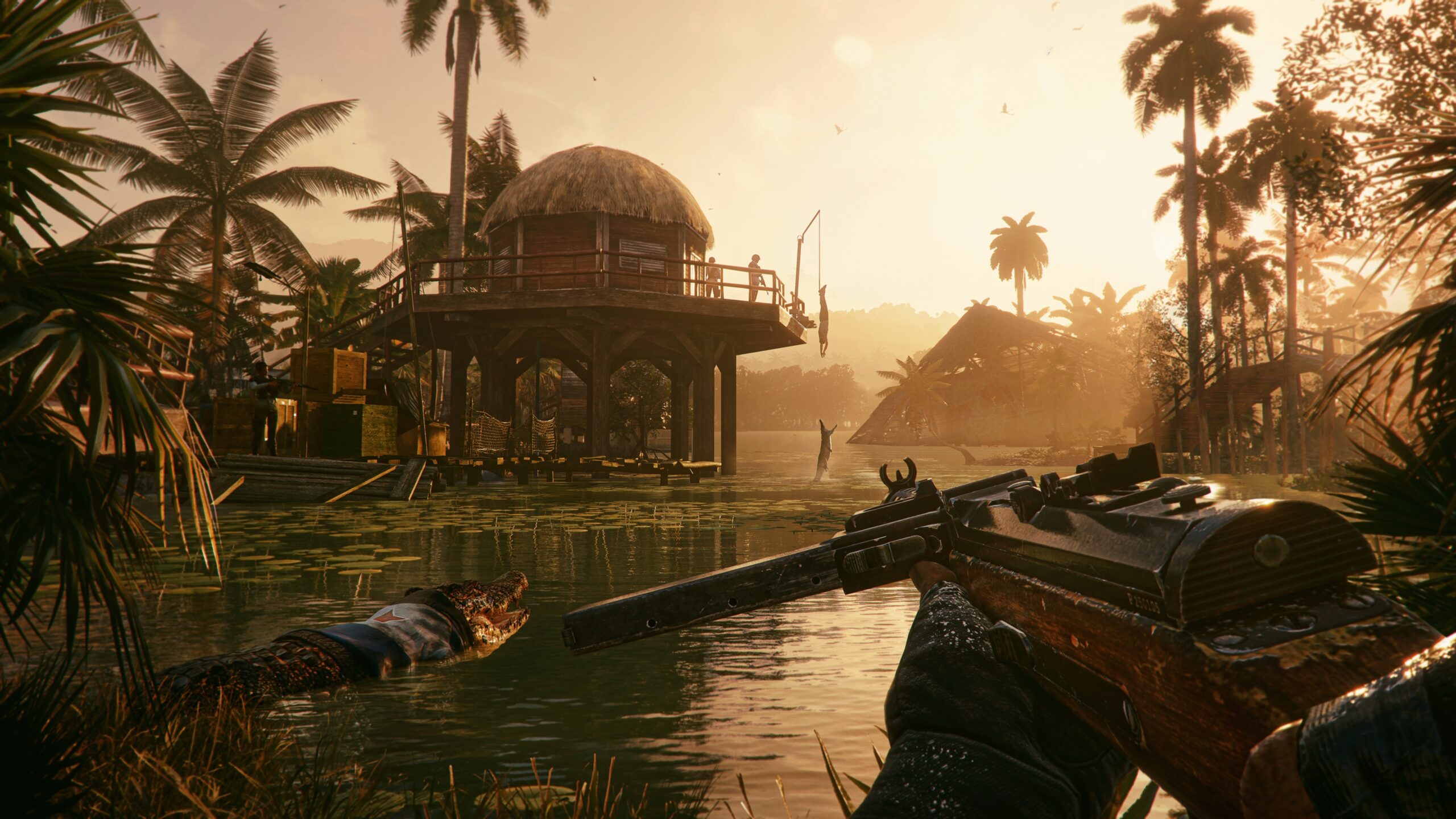 It wouldn't be a Far Cry game if it didn't have a beautiful open world to explore, of course. Yara has been crafted so that it would feel like a real country, not just a single region. That means it offers the most diverse environments in a Far Cry game yet: jungles, beaches, swamps, villages, and even cities (including the capital of Esperanza), Far Cry 6 will have it all.

Dani will have to tread carefully in Esperanza, though, as Anton has placed it under martial law so that it is off-limits to all civilians. Therefore, it is advisable to stick to the Guerrilla Paths available above and underneath the city whenever entering Esperanza.

All across Yara, players will find road checkpoints to conquer for Libertad, flak cannons that need to be destroyed (or they'll shoot down your aircraft if you enter their range), and FND bases which are Far Cry 6's version of outposts. FND bases aren't just military bases, though, as Anton's forces have also taken over schools, museums, TV stations, and even farms; it will be up to Dani to liberate these structures for the revolution and the Yaran people.

Far Cry 6 may not look like a literal revolution compared to previous iterations, but it certainly feels like a natural evolution of the incredibly strong foundation set by Far Cry 5. The game is now officially due on October 7th on Xbox Series X|S, Xbox One, PlayStation 5, PlayStation 4, Stadia, Amazon Luna, and Windows PC exclusively on both the Epic Games Store and the Ubisoft Store.

After the presentation, we got the chance to talk to Narrative Director Navid Khavari. Enjoy the full transcript after the video break.

I know you've worked on Far Cry 4, Far Cry Primal, and Far Cry 5. How did your approach differ for Far Cry 6?

It's a bit like standing on the shoulders of giants. We really doubled down on creating as much of a cinematic narrative as we could. It started with finding a unique setting with Yara, which is this island that's sort of frozen in time, and then looking at the characters that would spring from that.

If you dive into the guerrilla fantasy and the guerrilla revolution, you immediately see the complex web of motivations drawn from that. For us, the base level was 'Who are you going to meet, who are you going to unite, who's going to betray or double-cross you, and how does that lead into the bigger narrative?' I think the key is also in bringing back a voiced character, having a character that is local, from Yara, and can speak to that revolution from a personal level. There's also the notion of a father-son relationship when it comes to our antagonist, played by Giancarlo Esposito and Anthony Gonzalez. I think it adds a whole new dynamic to sort of form a triad with the lead character, I think players will find it unique and refreshing.

Speaking of Giancarlo Esposito, it's the first time that Ubisoft taps such a high-profile actor. What was the process of working with him? Did he help you further refine the character of Anton?

He was fantastic. As we were progressing through production, we started picturing his voice as we were writing, I just kept hearing Giancarlo's voice. We were fortunate enough to fly to New York to meet with him, sit down and talk about the character, and he showed up with a pile of notes, even some props that we could play with. It ended up being a four-hour meeting which could have gone on for the whole day.

He really helped us hone in on the father-son angle, that theme of legacy. He poured everything he had into this character, and that translated into when we were doing performance captures. We had tons of conversations around the script. He's a Far Cry villain I don't think players have ever seen before.

The franchise is known for its strong villain figures. However, Antón Castillo seems a bit more grounded than other, more unhinged villains we've seen in Far Cry. Is it fair to say this story will be a bit more serious?

I'd say it was critical for us to have Antón show this empathy to his son, as it played into the complex and nuanced motivations we had in mind for him to be able to justify what he's doing in Yara. There's such a rich pedigree of Far Cry villains and we're building off of them. We always try to imagine what it's like to be a dictator, hearing things from their points of view. That even led to the notion of seeing Antón and Diego without the player present, which is something new we're bringing to the table of Far Cry 6. In a lot of ways, it's more that he's joining the family of villains as opposed to a radical departure.

Is the narrative going to be fully linear?

For us, it was important to maintain the notion that you can go in any direction once Yara opens up to you. We were tasked with trying to make the narrative truly function and adapt whichever region or area you start in. If you go to the Western regions of Yara and decide to jump over to the Eastern or Central regions, or even take a run at the capital city, the story is going to work. We have these story arcs that tie into the overall metastory.

Lately, open world games have been trying to weave more tightly the main content and side content. Did you also work towards this goal?

Absolutely. With Far Cry 6, we didn't even use the word side content much when talking within the team. These are operations and stories that you'll experience among the local population. It all comes back to having characters that have complex goals and needs. Tonally, thematically, everything needs to fit within the sandbox of the revolution, even if the characters aren't necessarily talking about the revolution. Their very existence and livelihood is impacted by that, so we're trying to bring to light the complexity of such a situation.

Will Guns for Hire be coming back?

The Guns for Hire system as in Far Cry 5 will not return, but you won’t be alone for long. There are many moments when you will be fighting alongside guerrillas during missions and in the open world. We also wanted to have a bigger roster of FFH for this FC and we created some amazing amigos that will join the players on their quest to free Yara.

Are Fangs for Hire coming back in Far Cry 6, then?

We know how much our players love Fangs for Hire, and Fangs for Hire are back in FAR CRY 6 with a new roster. This time we see them less as “for hire” and more as lovable-but-deadly amigos. One of the new faces is Chorizo, our disarmingly adorable dachshund and Guapo, our soldier eating crocodile.