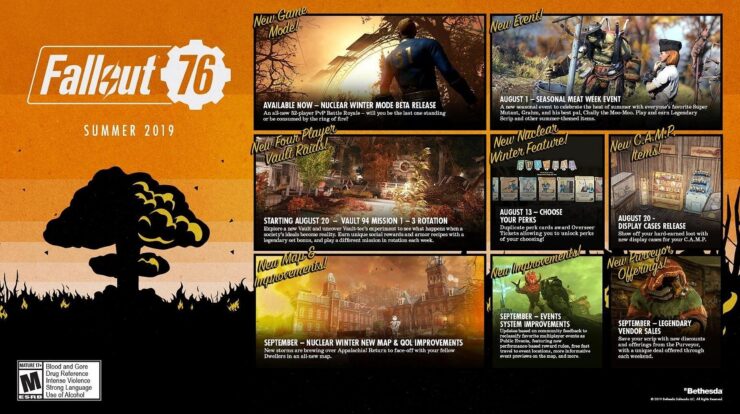 QuakeCon 2019 wasn't all about DOOM Eternal, even though the id Software game was indeed the star of the show. Bethesda's Fallout 76 was also featured prominently, with developers spilling the proverbial beans on what's coming next to the game during a panel.

First of all, the highly awaited Vault 94 raid has been confirmed to be opening on August 20th. This first raid (instanced and designed for a four-man party) will feature three difficulty levels as well as three different missions on a weekly rotation. Rewards such as legendary items are said to be plentiful, and armor recipe drops will add the first legendary bonus item set. The update due on August 20th should also add display cases as an item that Fallout 76 players can install on their base, allowing them to properly showcase loot to visitors.

The Battle Royale inspired Nuclear Winter mode is also getting a new map featuring Morgantown, the Monongah power plant, and a portion of the Toxic Valley. That will happen in September alongside improvements to the Event System (fast travel to events will be free, rewards will be more consistent and based on the player's performance.

However, the biggest improvements and additions will happen with the Wastelanders update, tentatively scheduled to hit in November (one year after the game's launch). NPCs will be back in force across the map, the developers said, and the dialogue system with them will be more akin Fallout 3 than Fallout 4, which got a cheer from the QuakeCon 2019 crowd. Companions will also be recruitable and even romanceable.

Interestingly, Wastelanders is even going to bring back a full-blown reputation system with factions like Raiders, Settlers, the Mothman Cult mentioned during the panel. According to the developers, you'll be able to work just for one faction or all of them, even double-crossing a faction if you want to. New weapons are on the way as well, such as classic Gauss/plasma weapons and even a bow on whose arrows players can attach dynamite sticks.

Lastly, private servers were teased to be coming to the game 'sooner than you think'. It's hard to gauge what that means exactly, but we reckon it should be this year. Private servers are anticipated within the community mostly because they should be linked to mods.

As a reminder, all of these Fallout 76 updates will be free.