Fallout 4 Patch 1.2 is now available for Microsoft’s Xbox One as well, but if recent reports are to be believed, Bethesda might have slightly downgraded the game’s visuals on all platforms to boost performance.

Yesterday we posted that patch 1.2 improved performance on the PS4 version of the game. Eurogamer’s Digital Foundry put patch 1.2 to the test on Sony’s platform.

Bethesda delivers a notable boost in Corvega's overall performance level compared to the day one patch. Across the breadth of our video below, a run of this area puts us at a fixed 30fps in places where the older version dwelled in the mid-20s. It's a night and day difference at points. It's a handsome boost then - but it must be stressed that we're still in the process of determining whether this improvement reflects the game's other stress-points on PS4 - such as effects-heavy battles.

Fallout 4 Patch 1.2 improves performance, but at a cost

According to the 1.2 patch notes, the update includes general memory and performance improvements, which applies to all platforms. Following Digital Foundry’s performance analyse however, Neogaf users started to wonder what Bestheda exactly did to improve the game’s performance.

The following hasn't been confirmed, but as noted by Neogaf user Kaffeemann, it would seem that Bethesda has downgraded the game’s visuals (at least in the area analysed by DF) by removing shadows on all platforms.

This particular effect can be seen in the Digital Foundry video down below (skip to 1:14 in the video).

Although Digital Foundry tested the PS4 version in the video above, Neogaf user Ricerocket put the PC version to the test, and uploaded the following screenshot. 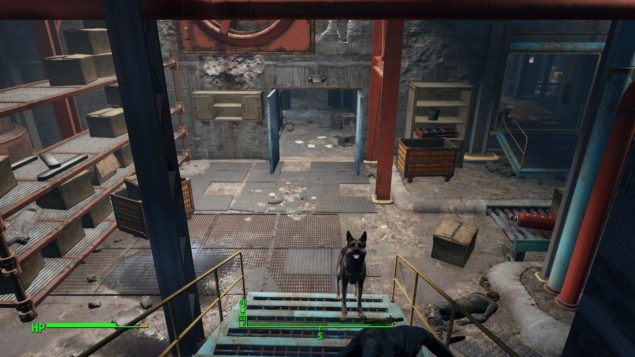 The screenshot is said to be taken on maxed out settings, with shadow distance on high. As can be seen from the screenshots, shadows seem to have been removed on the PC version as well. Although the slight visual downgrade has so far been only reported for the Corvega Factory area, it remains to be seen whether this downgrade occurs at more areas in the game.

Did you have the same experience, and what do you think of Bethesda downgrading visuals on all platforms?