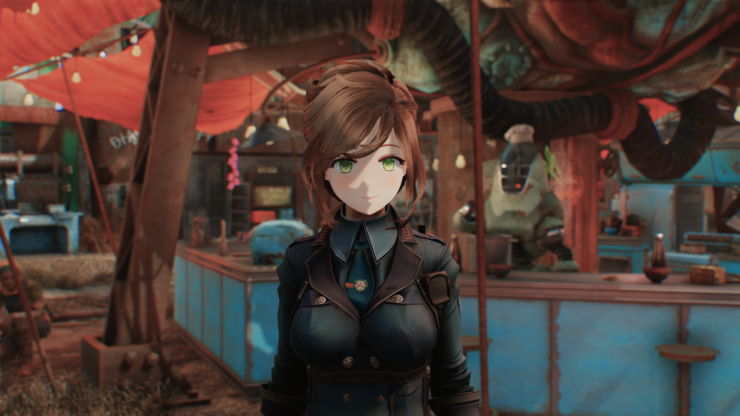 The Fallout 4 mod scene is still very much active despite the three years and a half passed since the game's original release.

Below we've added the creator's description of Animerace Nanakochan and his tips on how to use it. Let us know if you like the mod after trying it!

Why did you make this MOD?
When I first learned about Kasumi and heard her cute voice on the tape, I imagined that she was definitely a beautiful girl.
I was absorbed in her and went to see her in a hurry.
I was so excited that I even forgot that the game I was playing was Bethesda.

I was in despair when I met Kasumi.
At the same time, I realized that my ideal kasumi could not exist in this world.
I had to choose between quitting the game or creating my ideal kasumi.  (I was shocked so much.)

And I decided to make the ideal kasumi by myself.
I created this mod after learning about modeling and character mod that I had never experienced before.

The MOD was born in this way.
I'm glad if you enjoy this mod.

- My MOD looks more anime-ish if you use ENB.

- If this MOD is not introduced, the head size of all humanoid species will be large.
- Note)While RaceCustomizer is active, if a player tries to load saved data other than the anime Race (NanaRace) or PlayerRace,
the game will crash. (There is no problem with a new game.)
- Prepare save data played in anime race (NanaRace) before using.

Load order
Place "AnimeRace _ Nanako.esp" at the end as much as possible.
If you are implementing RaceCustomizer, be sure to position it below "RaceCustomizer.esp".
How to use
This video explains character creation.

In the first half of the video, the character creation method is introduced,
and in the middle part, the color change of eyebrows and eyelashes is introduced.

Use the eye color that corresponds to the face number you selected.
If you select an eye for another face number, the display will be strange.

Enter "slm 14" to create a character.
In the case of a new game, the first charactor creation selects only the gender and ends immediately.
After that, please do character creation as usual.

You need to create a patch with FO4Edit.
Use this image as a guide to create an NPC patch for animerace.
After that, please do character creation with "slm xxxxxx (NPC ID)".