Black Friday is only a couple of weeks away, and with most of this year’s highly anticipated video game titles already out, it seems like it will be hard to choose between the all the exciting game and console bundle deals that major retailers are offering. However, there is one deal that stands out from the crowd. If you are shopping for a home console this year, you would probably like to pick up the awesome Fallout 4 Xbox One 1TB bundle that HHGregg is offering for $349 only. 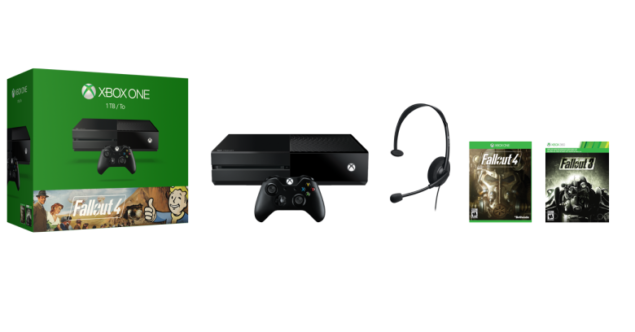 The eighth generation PlayStation 4 and Xbox One consoles have sold millions of units worldwide since their launch back in 2013, and the sales figures continue to rise at a quick pace. Many major retailers are looking to sell a large amount of units this year on Black Friday with tempting console bundles at discounted prices, and if you are planning to pick one for yourself, you should definitely consider the Xbox One Fallout 4 bundle, which normally retails for $399, but HHGregg’s Black Friday deal will see its price brought down to $349 only.

Now $50 saving might not sound like a lot to some, and of course there is the Xbox One Gears of War bundle that several retailers are offering for $299 only, but the thing to note here is that the Xbox One console in the Fallout 4 bundle comes with a massive 1TB hard drive, and in addition to a copy of Fallout 4, you will get backwards-compatible Fallout 3 for free. That is all HHGregg is offering as far as console bundles are concerned. You can check out the entire HHGregg Black Friday 2015 deals circular here.

The Xbox One Fallout 4 Bundle includes: