For the people living in the developing countries, Facebook has focused its insights purely on the low end specification smartphones which promises the provision of Facebook services just as it used to. Facebook is capturing market everywhere; it does not want itself to be left out or competing with other social apps in the third world countries. 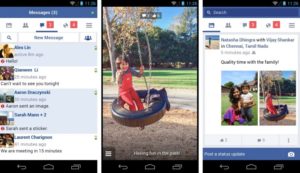 The app has an elementary design with simpler functionality; however all of the major components are present in the app which embraces Messenger, Groups, Pages and much more. Users can also rely on the full notification support for central Facebook experience. The Play Store description for this app is given in the screenshot below, check it out:

From the tests that I have held on my high end smartphone, the Facebook Lite app does shout out its name as being light, you cannot have fully functional features like playing a video. I don’t know if it’s just us or they haven’t featured video playback at all, nonetheless do let us know about it. However, one cannot expect the app to be this light and has all of the fully functioning features.

Facebook did not showcase its lighter version with a blast bit in lieu it was a mere silent launch done on 20th January. The app is now available in the third world countries like Nigeria, Nepal, South Africa, Bangladesh, Sudan, Sri Lanka, Zimbabwe and Vietnam. In such areas the connectivity is laggy and there is not much smartphone penetration. However, Facebook has chosen these places for a ground test before undulating it to more areas.

The motive behind this release is to cater new online Facebook users since there has been a drastic decline in the developed markets. This is one of the initiatives that Mark Zuckerberg took in developing countries; the other of such kind is the internet.org which aims to bring free internet to unmerited areas as well as Facebook Zero, which is sponsored Facebook access.