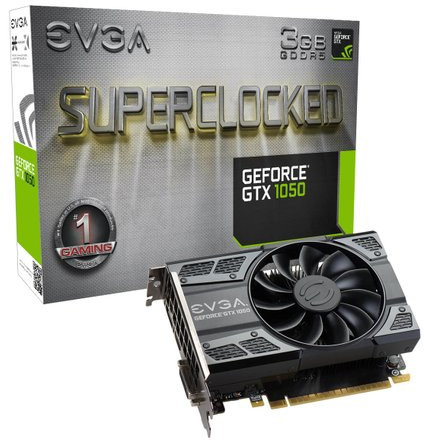 After much fuss about the 3GB 1050 Variants only being for China, we finally see some variants hit the states, Evga yesterday announced the availability of a GTX 1050 3GB Graphics cards, The  GTX 1050 Gaming 3G and Superclocked 3G model. They both carry the same 768 CUDA cores. Clocks for the Gaming 03G are NVIDIA reference (1392 MHz base, up to 1518 MHz boost, 3 GB of 7008 MHz GDDR5 memory across a 96-bit memory bus), and the SuperClocked version brings the core clocks up to 1455MHz and 1569MHz (base and boost, respectively).

We covered the news on these cards earlier this year and stated it looks like NVIDIA is still adding new GeForce 10 series cards amidst rumors of a next-gen launch. The updated GeForce GTX 1050 improves upon everything that the older model offered. The main reason for launching this variant is that the previous 2 GB model has serious memory limitations and with 3 GB, users can do slightly more productive work and games can perform better without the memory buffer being all gobbled up by the application.

The memory is clocked at 7 Gbps just like all the other 1050 (Ti) models but is featured along with a 96-bit bus interface with a memory bandwidth of 84 GB/s.

The cards are a rather short form factor of only 144.78mm x 111.15mm and feature simple sing fan cooling solution which honestly should be more than enough since the cards can function on PCIe slots for power with its 75w TDP. The cards have a single dual-link DVI-D a Displayport 1.4 and a single HDMI 2.0 port.

The Gaming 03G version will be available for $159.99, while the SuperClocked version comes in at $169.99. Both feature a three-year warranty.