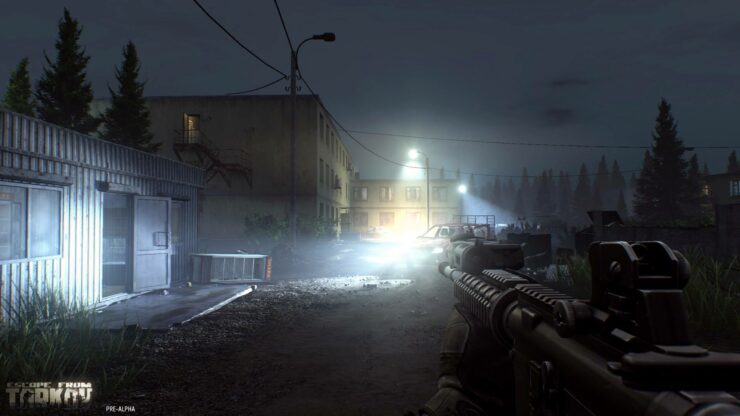 About ten months ago, Russian studio Battlestate Games announced Escape from Tarkov out of the blue. This first person shooter with MMO and RPG elements quickly received the attention of many gamers, so I was eager to check out the game at Gamescom 2016. I played for a little while and quickly got killed, but to my credit the same happened to Pavel Dyatlov, the developer who was showing Escape from Tarkov.

The impression I got is that this won't be a game for everyone due to its very nature, but it might be loved by those who really are into hardcore first person shooters.

After the presentation, I talked with Pavel Dyatlov about the game at length; here's the full transcript.

How much of a survival game is it?

We have a health system, you need to drink and eat to stay alive.

How often do you need to eat or drink?

About half an hour.

[...] Our mod system lets you switch all the parts in a weapon: magazine, scope... In fact, you can also attach two or more scopes to the same weapon if you want.

When you die in the game at the hands of a human player, you lose everything except what you had previously stashed. You can then buy weapons from traders if you need to. Trading system is a huge part of Escape from Tarkov, and players need to know what each dealer is selling: unlike other games, not every merchant will be all items.

Can you bargain to get a lower price?

Well, if you cooperate with him often enough he will make you a discount. You need to improve your reputation.

We have a skill system, so the more often you trade the bigger discount you get from all traders.

There's also player to player trading in the game, right?

Yes. The player can also be the trader, but it will be very hard to accomplish.

Is there a shooting range of sorts to try weapons before buying them?

Not yet, but we plan to add it.

If you want to be a bully towards other players, a player killer (PK), you can. But you will lose karma: in this case, traders will get angry at you and increased their prices.

I know you began the Alpha phase recently. Can you discuss how it's going?

You know, it's going pretty well. We already sent invites to everyone who pre-ordered the game so far.

Did you have a discussion about adding VR support to Escape from Tarkov?

Absolutely, we'll be discussing this with the appropriate people.

When are you planning to release the game?

This year, and it will be a full release.

Is it going to be on Steam?

We will first release the game on our platform and then we will launch on Steam, that's the plan. 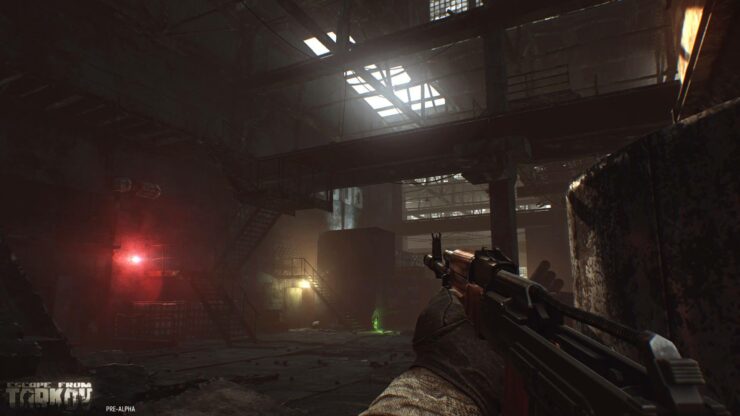 A few months ago, you also mentioned that Escape from Tarkov might be released on consoles...

For sure, but only after the release on PC.

What happens once you "Escape from Tarkov"?

You can begin again, and again... Something to be noted is that in order to exit each location, you'll need to find a key. Whenever you start the mission, you don't know where the key is.

There's a chance the keys you already have in the inventory might fit in the door, so you have to try.

How often are we going to encounter human players?

Pretty often. I'd say it's basically 99.9%, you will surely encounter other players. Maps are large, but not that much that you wouldn't meet anyone else.

What's the maximum number of players that can be in the same map?

RIght now it's pretty low, but we'll probably increase it to ten or more.

Is it possible to play with friends?

Yes, and you would be placed in one location together.

Do you have an estimate on how many weapons there'll be in the game at launch?

Indeed, when there's a lot of it you can only see as far as you hand extends. At that point, you might even shoot your friend.

So friendly fire is always on, right?

Of course. This is a hardcore shooter, so friendly fire is always enabled.

How many hits can you take if you have a bulletproof vest?

One or two. Something might be broken, though...We have a health system and you can, for example, stop blood loss by using bandages. If your leg breaks, you'll get a limp.

Rubles are the main currency, right?

Yes, but you can also find euros and dollars and then exchange them.

Do you plan to have an Open Beta, before the game's launch?

Do you have levels in the game?

Currently 99. But it will be quite hard to reach even level 10. You need to gain experience, but that only happens when you survive.

Our skill system is expansive, though it will only be added to the game in Beta. It works like this: when you do something, you'll be more proficient, like Elder Scrolls.

Can you unlock all skills eventually?

Yes, but it will take a very long time. Also skills are split between the two factions. Moreover, characters can eventually forget skills if they don't play for some time or they just don't use them.

Are you afraid that people might try the game and just give up after dying again and again?

This is a hardcore shooter. People need to know what game they're playing. When you create a character, there's a window clearly saying that you'll die constantly.

Is there going to be character customization in Escape from Tarkov?

Not right now, but it's a good suggestion; maybe later. Though when you have played a lot, your beard will grow.

Did you consider having female characters playable?

We considered that, but we came to the conclusion that women are not allowed to be in the war.

But these days, women are in the military...

I can agree with you and we discussed it for a very long time, but we came to the conclusion that women can't handle that amount of stress. There's only place for hardened men in this place.

Escape From Tarkov Is PC First, Console Graphics Will Be Lower; VR Support Is Possible

Escape From Tarkov May Be Coming To Consoles; New Stunning Screenshots Released