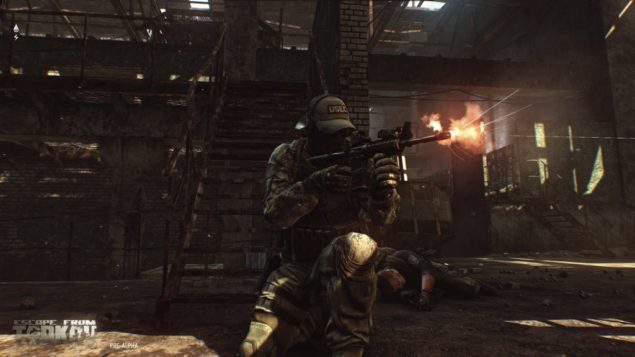 According to the press release, the game is set in the Russian city of Tarkov, where players will work for two private military companies locked in a deadly conflict. With the city surrounded by UN and Russian forces, the goal will be to discover the mysteries of Tarkov, survive deadly hazards (such as radiation poisoning) and ultimately find a way out.

The main features of Escape from Tarkov are outlined as follows:

Some additional details were shared through an interview posted on a Russian site. The game won't have a persistent world, since the developers have opted to make this a hardcore shooter in terms of simulation. The maximum number of concurrent players will be 64, but there will be many other MMO staples such as quests, levelling, crafting, economy, social system (guilds/clans/groups) and more.

The main mode is called Raids. Here, players will be dropped in a location where they will find loot, receive experience for performing different actions and investigate the events; to successfully move to the next location, they'll have to find the exit. Another mode is called "Free Roam", with a larger hub completely open to exploration.

There are no limits to PvP, so you'll be able to kill whomever you want and take their loot, but there will be a Karma system in place to deal with Player Killers. Still, an insurance system will give you some money back for the items lost.

Battlestate Games also promised dynamic weather that will influence soldiers, random events and a lot more. To the veteran gamer it might sound too good to be true, however the team shared the first gameplay video today showing some really exciting action.

Also, Escape from Tarkov already looks great for a pre-alpha running on Unity.  Check it out below and stay tuned for our coverage of this interesting project, which will have a closed beta in Q1 2016 to prepare the full release scheduled for Q2 2016 on PC & Mac.