Wireless Router That Can Charge 12 Devices All at Once

There have been many claims to wireless charging by companies but most of them required putting our mobile devices on a charging plate or some kind of a charging pad. That still didn't satisfy many people, i'm sure most of us are not happy having to go trough the trouble of connecting a lead to our devices and then being stuck either near the charging outlet, because there's a limit to where the lead can go, or literally on the charging pad/plate. It seems that Energous corp. has come up with a solution to our problem that is not completely limitless but is a good step forward.

Charging your mobile devices has never been easier

Energous Corporation WattUp displayed its product at Consumer Electric Show 2015, demonstrating an idea where you’ll be able to charge your devices whenever and wherever you are within a range of its exceptional wireless transmitter. WattUp is basically a Bluetooth and RF enabled transmitter which use WIFI In order to distribute ‘’Intelligent, scalable power”, the company said. This is delivered to all the devices which requires less than or up to 10 watts of power.

"WattUp™ transmitters, or power routers, deliver power within a 15-foot radius of where they are installed, creating a 30-foot envelope of wire-free charging space.  Each of these power routers can charge up to 12 devices at the same time, so your power needs are truly covered.  And the entire system is software controlled for flexible, accurate and efficient power delivery." as stated on the company's website.

The system uses a multiple input, multiple output (MIMO) transmitter that sends up to 23 dBm (Decibel-milliwatts) around an area of 120 degrees. This creates a 3D energy pocket utilizing that RF spectrum. The system delivers an average of 2W to 4 devices at the same time within the 15 ft radius. The closer you are to the transmitter the more power you will receive:

Charging times will vary because the more number of devices there are the slower the charging will be and different amount of power is allocated to different devices, but atleast it's something that can be termed as truly wireless charging. 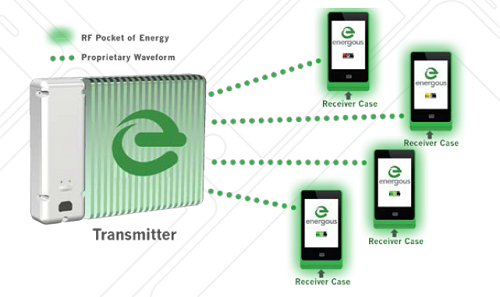 WattUp uses the 3D pocket technology to direct the energy to the receiver precisely. It does so by dynamically altering the RF waves in such a way that they can be targeted to a specific location. Then the energy is gathered by the 'metamaterial array' of the receiver and this is where WattUp's ASICs covert the RF signal into a DC current and deliver a charge.

"The entire WattUp™ wire-free charging process is software controlled.  Using either our app or cloud-based web portal, you are able to identify which devices you want to receive power, how much power to send to each device, and even at what times you want them charging." stated the company's website.

WattUp can pair upto 12 devices using one transmitter. The order in which devices receive power is also established, the transmitter also sets specific levels of power for each device connected (from 1W-4W). The minimum level of power for each device is set so that when it reaches a certain minimum level its start charging and does not die out. The software creates a schedule for charging devices and decides at what times should each device receive power, it also makes sure that every device receives a charge automatically. This video shows WattUp software overview by Energous 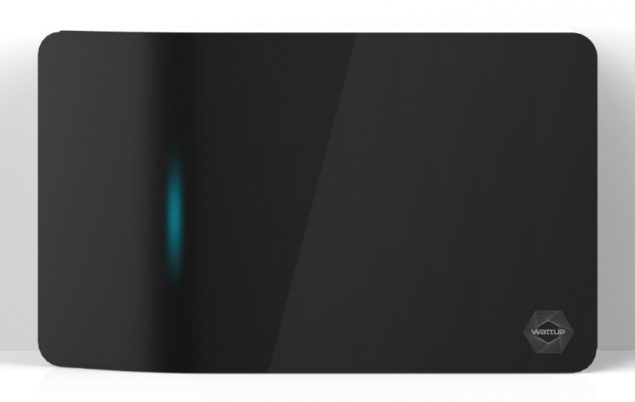 This Energous Software seems multi-talented; smart enough to detect which device state is more prone to charging and hence shifts the charging burden to the device with low battery. However vicinity issues still survive i.e., when you are closer to the device, you are probably going to get more power by the router. The company also claimed to have an app at their disposal which can control the preferences with which the devices charge. Important and handheld devices such as cell phones and laptops including tablets and iPads are charged whenever you are in the transmitter’s vicinity but the rest are charged at night time. For more information regarding this gadget, and the credits for most of the stuff written here, check out the company's website