Elite: Deadly might be the upcoming Elite: Dangerous expansion

The Space-Sim Elite: Dangerous from the developer 'Frontier Developments' released back in December last year, and had previously been available as Alpha and Beta clients for people who backed the game during the original crowdfudning campaign or preordered one of the more expensive packages via their own shop after the Kickstarter was over. Now it seems that it's quite possible that the first expansion (paid expansion one would assume) is already in the works, since Elite: Deadly has now been trademark registered. 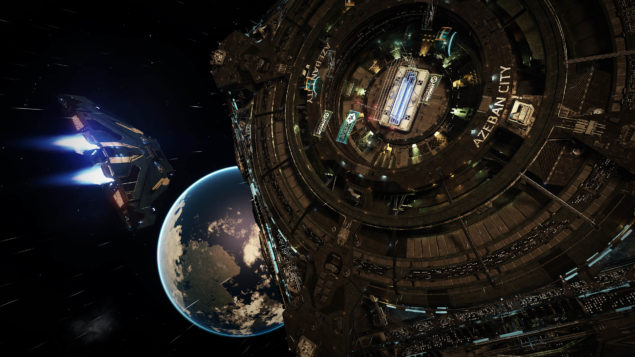 Could Elite: Deadly be the first paid expansion?

Negoaf users are usually quite good at spotting things that are hiding in nooks and crannies all over the Internet, and in this particular case Negogaf user "ekim" posted yesterday about the Trademark registration. As mentioned in his post there is no owner for the Trademark filing as of yet. But seeing as the same Representative has filed trademark registrations on Frontier Developments behalf before (Elite: Dangerous), it seems quite likely that this has to do with the game.

Now Elite: Dangerous has had a bit of bumpy road from alpha to release, just weeks before the official release David Braben CEO of Frontier Developments came out and stated that they would be dropping the planned offline feature for Elite: Dangerous. This was after letting everyone believe for over a year that the promised feature from the initial Kickstarter pitch was still going to get implemented. Braben tried to explain that they were dropping the offline feature due to "Not wanting to make an empty galaxy"

"It is a creative decision, not wanting to produce an empty game. It is technically possible, but it would be a largely separate game development. We have been clear and consistent. This is about the game experience. I have always been against ‘pay to win’ – in a game like Elite: Dangerous there are a great many opportunities we could have taken already that would have amounted to ‘pay to win’ but we have chosen not to.

This whole issue comes down to what the vision is of the game we are making, and whether people trust us to make the right decisions. We made this decision with heavy hearts but for the right reasons."

The main issue with all of this for me personally (and a lot of other backers/customers) were that this essentially killed any and all hope for modding of the game, since there are no "Private-servers" or anything, you only have the main server shards provided by Frontier Developments. This pretty much means that you can't modify any of the game-files, so modding is out of the question.

And as you may or may not know, Frontier have stated that future expansions of the game will include new ships, ships that will in all likelihood not be available unless you buy said expansion. If the offline mode was still on the table, we would probably already be seeing tons of nice and new ships that were implemented via mods, and I bet that Frontier thought the same thing, and that's why they decided to cut it. And let's not forget that phrasing can be quite important when making statements:

The Fer De Lance is one of the new ships coming as part of a free update to Elite: Dangerous in March. pic.twitter.com/PtTGFLRTW6

Note the "free update" part? Yeah let's hope this isn't the start down a long and tedious money grabbing road. Until they come out with some form of official statement about the Trademark registration one can only speculate about what it could be, and even if it's the name of the first expansion, well I just hope they patch and add more content to the main game before they actually release it.