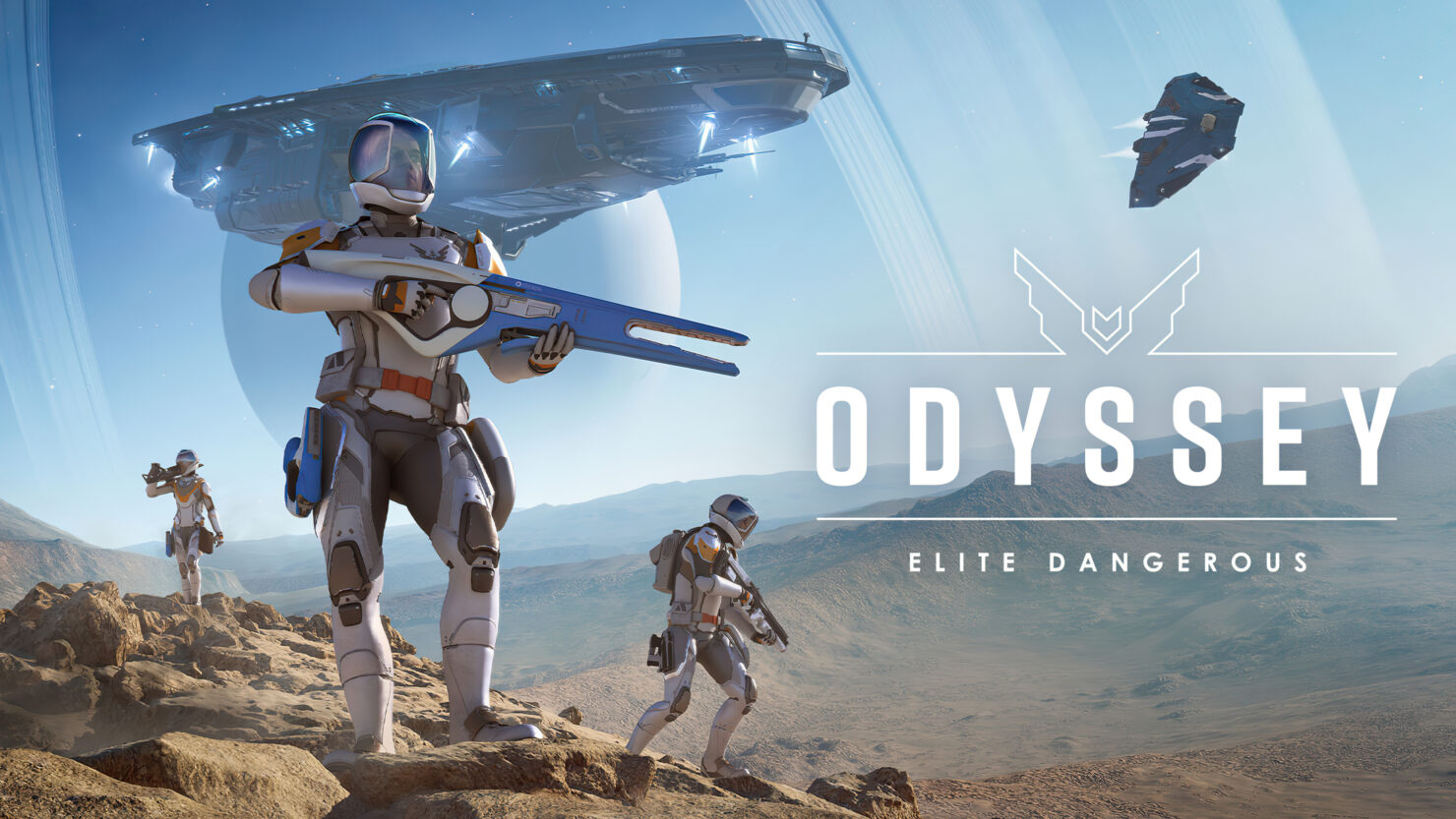 Odyssey, the upcoming Elite Dangerous expansion due to release in the first quarter of 2021, will finally transform the latest iteration of the 30-years-old space flight simulation franchise into something more than that. At long last, spacefarers will not be confined anymore to the darkness of the Great Void. Instead, they'll be given the exciting chance to explore uncharted planets all throughout the Milky Way while they go about their various orders of business.

We've had the opportunity to speak with two key members of the development team at Frontier, Art Director Chris Gregory and Game Designer Luke Betterton, to delve into what it's going to mean exactly to take the proverbial 'one giant leap' for the Elite Dangerous team and community.

Let's begin with what you personally consider to be the most exciting aspect of Odyssey.

Chris Gregory: I think what's most exciting for me is delivering on some promises that we made when we started making this game years ago, in terms of David's commitment to the idea that one day you would be able to get out of your ship and form float, and we are actually doing that. That's what's really exciting. And the reason it's taking a while is that it's something we're going to do justice to.

For me, it's like making a new game. It really is that level of delta between what we've got and what Odyssey is. Again, it sits alongside everything that you have about the old game, but from a depth point of view, it's a new, really exciting challenge.

Luke Betterton: In Elite, we've got this the idea of starports and then there's the various kind of bubbles of humanity that are scattered about the Milky Way. And you generally do stuff at this stop and then you deploy elsewhere in another star system. It's very big. In Odyssey, though, you get to go one step down in terms of how granular the galaxy is. Suddenly all of the planets have a lot more activity, they've got a lot more people on them, various industrial settlements that are actually doing stuff. For me, it's the idea of being able to, as a player, go to those locations and interact with them and have that kind of more personal experience with the various people that are in the galaxy that otherwise have previously been just faces on boards or, you know, fairly distant inbox messages and that sort of thing. Now they'll actually be there doing stuff. It's gonna feel really good.

Following up on that, Odyssey is going to be Frontier's debut first-person shooter game. Was that challenging from a development perspective, stepping out of your comfort zone?

Chris Gregory: Yes. As mentioned before, that's what makes Odyssey feel new and different. And although as a company it's not something we've done before, a lot of the people who have joined the company come from a place where they're very familiar with this kind of game. They know how to do this and so having them onboard has been a real help.

Luke Betterton: It's nice having that kind of mix of people who have worked on Elite for a long time, and people who are brand new to it and can give us a kind of different perspective. What we've ended up with is something that's technically an FPS but it doesn't necessarily have to feel like every other FPS, it's got kind of its own very Elite style to it.

Would you say it's more like a fast, arcade-style type or shooter or more akin to a slower-paced, tactical one?

Luke Betterton: It can kind of do both. Playing it recently, it's very much up to you as the player if you want to be slow, tactical, methodical, maybe even silent. If you're very, very good, you can do that. You can wage war on a settlement with human mates, that's very like a surgical strike kind of feeling or you can if you're strong enough go in guns blazing. That might not work in a more well-defended area, but it's very much up to you. It's never going to feel truly arcadey as we're grounded in sort of a sci-fi, scientifically-based reality so we're still going to keep that sensation going.

Is there any sort of character progression that is specific to the new FPS part of the game that you can talk about?

Luke Betterton: Yeah, we quite like that in the space game obviously. The ship is almost like your character there, you upgrade that as you go, you get better pieces, a new engine, that sort of thing. Obviously, you can't fit yourself with a new engine, but you'll be wearing a suit, you will have various tools and you'll have access to various weapons. And there's a way that you can improve those. I'd like to go into more on that, but we're going to go into more detail on that a little bit later on.

In terms of the split between PvP and PvE, will Odyssey focus more on one or the other, or is it going to be up to the player?

Luke Betterton: It's gonna be very similar to the current version of the game. The focus is obviously the factions, you've got the various factions vying for control of the galaxy. As a player, you can either participate in helping them trade well and all that sort of stuff, or you can outright PvE if you want to be a PvE kind of shooter type player, you can do that. You can be this faction foot soldier and take missions to destroy target settlements, or rather not destroy them but get rid of the people that own those settlements so that you can move in and take them over. But also, if you run into another player, if they're against you you either have to back out or you've got to defend yourself.

Can you just shoot everywhere or is it disallowed in settlements?

Luke Betterton: There are certain areas in Odyssey where we're not going to allow you to use your weapons, where you interact with NPCs, you pick up missions et cetera. But once you're out in the world, it's very kind of Wild West, if you're caught by yourself in the middle of nowhere. No one's gonna know that you were ever there. You may well get killed.

One question from the community is the status of VR for Odyssey. When will that be available?

Luke Betterton: Elite is obviously a very nice VR game. You sit in the cockpit, and you're in front of the stars. It lends itself perfectly to VR. I'm really glad that we did add VR support because it's pretty awesome, it is quite an experience. Being able to run around on foot, though, is very much a different experience. We're still looking at the way that we would tackle that if we need to. Or if we decide that we think we can get a good way of doing it. And sure, like, that's something that we'll tackle, but for the moment, we have to focus on the actual main experience and getting that working the way that we really want it to feel. So on day one, there won't be any VR support. But we're not saying never, it's just we need to focus our efforts elsewhere right now. 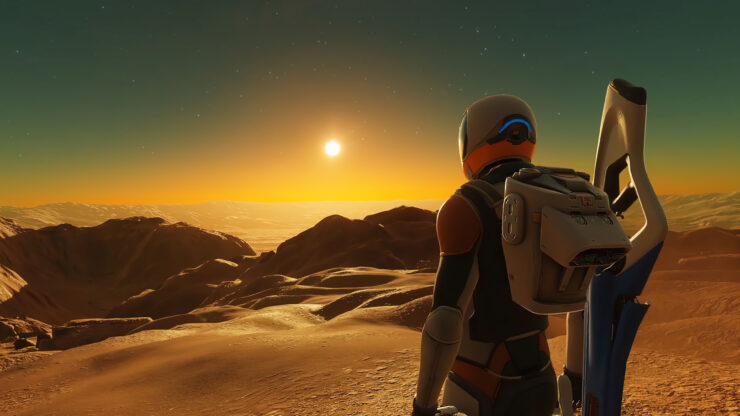 Would you say that Odyssey could be able to lure in even those gamers who aren't too fond of flight simulator games? How viable is it going to be for newcomers to focus on 'FPS content'?

Luke Betterton: One of the core principals of Elite Dangerous is based upon the freedom to choose your own path and experience our galaxy with as few restrictions as possible. In this spirit, new players will be able to choose to take their first steps on the ground or start their career as the pilot of a starship.

Combining this freedom with diverse first-person gameplay, extensive infrastructure to support on foot play, and the incredible universe and community that already exists within Elite, we believe will open up the world to a huge new audience.

Will 'FPS content' also include player ships, megaships, capital ships, and stations? What about boarding other ships and stealing them?

Luke Betterton: Our first development diary is focussed on planetary exploration and discovery, while I’m not able to share full details on this just yet I can say that players will be able to explore a variety of locations on foot. We look forward to sharing more about combat and player interactions over the coming months.

Are there any 'combined arms' elements to the 'FPS content'?

Luke Betterton: We will explore the diverse tactical elements that will converge in Odyssey’s sphere of combat in the near future, but for now, we can confirm that on-foot commanders, SRVs and starships will engage in a multi-layered strategic environment.

Is there going to be any weather system affecting players and/or their ships on planets, such as thunderstorms or dust storms?

Luke Betterton: At launch, Odyssey will allow players to land in thin atmospheres which won’t have aggressive weather fronts of this kind, but we would love to bring those to Elite Dangerous: Odyssey in the future.

Will there be additional SRVs or fighters in Odyssey? What about new ships or reworks for older ones?

Luke Betterton: There are plenty of ways to get around in Odyssey and we look forward to sharing more over the coming months.

Luke Betterton: Elite Dangerous: Odyssey offers a completely new perspective to play, and multiple paths to keep forging your own narrative for veteran and new players alike. You may decide to carry on with your selected vocation, bounty hunting, commerce, piracy… or engage in something new. With unprecedented detail and a whole new set of tools and environments at your disposal, you can take the chance and start a completely different career like the brand new Exobiologist specialization.

Are there are any plans for a network code overhaul, possibly paired with dedicated servers for multiplayer?

Luke Betterton: We’re continuously evaluating all parts of our server infrastructure for Elite, whilst I can’t share any specifics with you right now our team are very much focussed on preparation for Odyssey’s release.

Looking ahead, is cross-play an option you're evaluating for Elite Dangerous as more and more games use it to enlarge their communities?

Luke Betterton: Currently, there are no plans for crossplay in Elite Dangerous: Odyssey.

Similarly, are you working on technical enhancements such as ray tracing and next-gen console support? If so, is there any ETA on when players might get either?

Luke Betterton: We’re always looking for ways to enhance the Elite Dangerous experience for our players but we don’t have any specifics to share right now.

Also, going forward, are you planning to keep supporting PlayStation 4 and Xbox One or will you focus on PlayStation 5 and Xbox Series X?

Planet Coaster Review – Your Imagination is the Limit