There have been a lot of Jurassic Park games produced over the past two-and-a-half decades, almost all of which have cast players as dino outbreak survivors like Dr. Alan Grant or armed park rangers/mercenaries. I’ve always found this a bit disappointing, though, because the Jurassic Park character I always wanted to be was John Hammond. The guy got to build the no-expenses-spared dinosaur park of his dreams! Sure, there were some pre-opening jitters, but when everybody else was running around screaming, Hammond got to chill out and clean up the ice cream. He’s obviously the guy to be.

Well, Jurassic World Evolution finally gives fans a chance to play John Hammond. The new sim from Frontier Developments lets you build your own park, play God with dino DNA, endanger your guests with your lax security, and other classic Hammond-esque things. So, is this the Jurassic Park/World sim dino nerds have been waiting for? Or is it one big pile of, well, you know…

At it’s core, Jurassic World Evolution is a pretty standard park management sim, very much in the same vein as Frontier’s RollerCoaster and Zoo Tycoon games. Dig up fossils, clone dinosaurs, collect cash from visitors coming to see said dinos, then use that money to repeat the process. In addition to that basic loop, you’ll have to deal with regular dinosaur breakouts and other disasters, and can build various gift shops, restaurants, and other amenities to bilk visitors out of some extra cash.

Jurassic World Evolution’s dinos are exceptionally detailed and well-animated for this kind of game, but, visuals aside, there isn’t anything particularly remarkable about how they’re handled. As in the Zoo Tycoon series, all your animals have their own preferences, represented by a series of sliders. Some dinosaurs species like forest, while others prefer the grassy savannah. Some enjoy company, while others are loners. Also, the game never explicitly spells it out, but certain species get along better than others. Velociraptors will immediately kill a Dilophosaurus, but my raptor pack got along quite well with my T. rex, which was surprising given their less-than-friendly relationship in the movies.

Grumpy dinos have a nasty tendency to knock down fences and run amok, so maintaining their happiness will save you a lot of headaches. Between keeping track of all the likes and dislikes and making sure those who don’t get along stay separated, it sometimes feels like you’re trying to organize a dinosaur Thanksgiving dinner. That isn’t necessarily a knock – finding the right mix of dinos is the most challenging, strategic, and satisfying part of Jurassic World Evolution.

Less satisfying is the game’s heavy emphasis on missions. Throughout the game, you’ll be courted by three competing divisions – Science, Entertainment, and Security. Completing contracts for these factions will earn you cash, unlocks, and reputation points. Once you raise your reputation with a division past a certain level, you can take on a more complex multi-stage mission with a particularly nice payday.

Most of these contracts and missions are very easy – often, you’ll already have the mission objective almost complete when it’s offered. There also doesn’t seem to be much logic behind what the divisions ask you to do. Oddly, the Security guy kept trying me to get dinosaurs to fight, while the Science lady often seemed more interested in park finances than research. Very broadly speaking, Science wanted more genetically-modified dinos, Entertainment was about park attendance, and Security seemed to be run by lunatics. Ultimately, I never really got the feeling that there were three distinct factions battling over the park. Siding with one division over the others never really changed anything. Generally, I just picked the missions that were the easiest and paid the best and ignored who was handing them out.

I also have to wonder – why aren’t the game’s three factions represented by actual characters from the Jurassic World movies? Owen Grady, Claire Dearing, and Dr. Ian Malcom all pop up to drop tips and one-liners, and Bryce Dallas Howard and Jeff Goldblum actually lent their voices to the game (the less said about Chris Pratt impersonator, the better), and yet, you spend most of your time dealing with three generic nobodies. It’s an odd choice.

Generally speaking, those hoping for much in the way of Jurassic World adventure are in for a disappointment. I wasn’t expecting an action roller coaster, but Jurassic World Evolution is slow even by simulation standards. It’s all-too-easy to get stuck in a self-defeating cycle – you don’t have enough good dinosaurs to attract visitors, which means you can’t make enough money to buy better ones. Often you’re forced to wait, for minutes at a time, for your bank account to slooooowly increase. This is exacerbated by the fact that everything costs money in this game – fixing fences, dinosaur food, individual tranquilizer darts. A couple dino breakouts can obliterate that nest egg you were building to buy a new research station or Stegosaurus.

Then the switch flips. Once things start clicking for your park, things tend to move fast. You finally get that one good dinosaur, park attendance explodes, you start knocking down contracts left and right, and suddenly you go from being broke to having more money than you can spend. In my experience, Jurassic World Evolution has two modes – “slow and frustrating” and “too easy,” with little in between.

Yes, you can add a bowling alley to your dinosaur park.

Of course, things going right ought to be only part of a good Jurassic World sim. What about when things go wrong? Unfortunately, that aspect of Jurassic World Evolution is also a bit disappointing. As mentioned, if you don’t keep your dinosaurs happy, they’ll break out of their cages, and if they’re carnivores, they may gulp down a few hapless guests. When this happens, you send out helicopters to tranquilize and retrieve the dinos, and…that’s about it. Once you get the dinosaurs back into their cages and settle up the wrongful death lawsuits, everything goes right back to normal.

If you’re expecting more complex, novel Jurassic Park moments, like, say, the raptors invading one of your facilities, or a T. rex chasing your jeeps around, keep hoping. Breakouts never get more elaborate than “dino gets out, runs around for a couple minutes, gets tranq-ed.” Fairly quickly, breakouts start to feel like a chore, as the game forces you to do everything manually. Even if it’s your 100th breakout, your rangers won’t go fix the fences or subdue the dinos unless you tell them to. Take a little initiative, guys! I realize the game wants you to feel like you’re in the middle of a stressful situation, but the fact that breakouts are all resolved the same way and don’t result in any serious consequences robs them of any real tension.

The lack of automation is an overarching issue for Jurassic World Evolution. If you could set up schedules for your rangers or budget out how much you want to spend on fence maintenance, dinosaur food, and so on, breakouts would have more gravity. They’d feel more like a consequence of your strategic mistakes. Instead, they mostly feel random – even if you pay close attention to your dinosaurs’ happiness, they’ll bust out occasionally. An inevitable annoyance, which is a sad way to describe a bloody dino rampage.

I realize I’ve kind of gone velociraptor on this game, picking it apart like that poor cow from the beginning of Jurassic Park, so I should clarify that I didn’t hate Jurassic World Evolution. The basic park management framework still works for the most part, and, again, cloning dinos, putting them in pens, and seeing what they’ll do/who will win in a fight is satisfying in a basic sort of way. The game also gives players plenty to do – there are five islands to play through, each of which present their own unique challenge, and once you best them, you unlock the sandbox island where you can tinker as you please. So, technically, you could play this game forever, although I suspect most players’ enthusiasm will quickly fossilize without any structure or guidance.

This review was based on a PS4 copy of Jurassic World Evolution provided by publisher Frontier Developments. You can purchase the game for PC via Steam, for PlayStation 4 or Xbox One via Amazon. 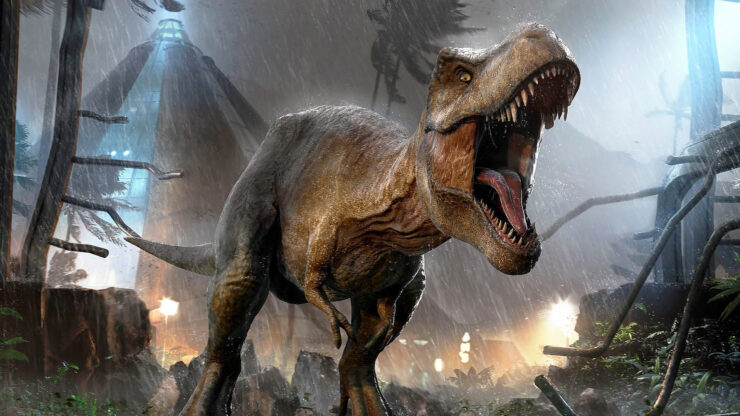 Jurassic World Evolution is lavishly produced and sporadically engaging, but it fails to infuse the park simulation genre with much big-screen excitement. If cloning cool-looking dinosaurs and dealing with a few light management elements is enough for you, Jurassic World Evolution should satisfy, but if you’re looking for a deeper level of strategy or true dino chaos, you’ll likely be disappointed. I’d recommend most Jurassic Park fans wait until this one, uh, finds a way to the bargain bin.