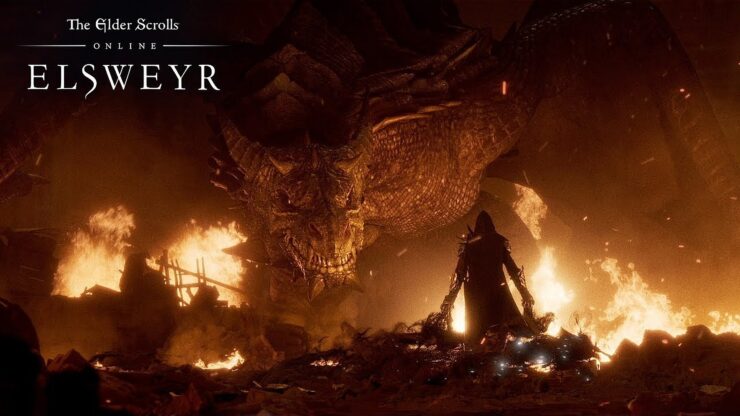 At E3 2019, we caught up with Creative Director Rich Lambert from ZeniMax Online for a chat about Elder Scrolls Online. The MMORPG based on the beloved franchise by Bethesda Game Studios just received a new Chapter (the game's moniker for expansion), Elsweyr, available now on all platforms.

We talked about what's coming right after Elsweyr in terms of content, features, technical optimization and more. Enjoy!

Elsweyr launched just a few days ago. How was the feedback so far?

It's been overwhelmingly positive. You know, players love the Necromancer. This is the most requested class we've ever had. Since beta they've been asking for it, we now have dragons which, again, is another kind of fan favorite. And players are really into exploring elsewhere in the land of the Khajit because they're a very particular race. They're very different. And they've really been enjoying it.

They speak in third-person, for one thing...

They do, they speak in third person, and they've only ever seen the side of the Khajit which was, they're thieves and peddlers. And the take that we took with them in Elsweyr is this is their culture. They're very spiritual, you know, they've been in the world of Tamriel for longer than any other race. It's very, very old. It's a super old culture, and people really enjoy digging into that and learning more about them.

Okay. And of course, during Bethesda's E3 2019 showcase you announced the two DLCs coming later this year. Can you talk about those a bit?

Yeah, the Q3 one which is Scalebreaker is a dungeon DLC. You're going to learn more about the backstory of the dragons and the Dragonguard, the group that is trying to kind of figure out what's going on with them. And then Q4 is kind of the culmination of the year-long story that we've been telling, where you finally get to deal with the dragons.

And that also includes a brand new zone, right?

It'll be a little bit smaller than that one. But it's still 10 to 15 hours of content.

All right. And, of course, there are many, many other topics within the community. So I'll try to see which ones you can talk about. For example, I always see in the comments on Reddit lots of people recommending Elder Scrolls Online as an MMORPG because it's got great stories. But at the same time, you'll see someone chime in and say, the combat isn't quite as good as it could be. So I was wondering if you have any internal plans to possibly revamp the combat system to make it a bit smoother from the animation point of view, less clunky.

Performance for us is kind of the biggest thing that we're looking at and trying to improve right now. And that is everything from how quickly the game reacts to the client, reacts to situations. So when you press a button and you animate your character, we're looking at those kinds of things, especially in high-density situations I think a lot of those performance issues have an impact on how combat feels, it feels a little bit slow and sluggish. In those kinds of situations, we want to fix that and make that better. Once we get performance into a good place where we're happy with it, then we can look at other things. But until we get that better, it doesn't matter what we do with the other stuff.

Okay. Is animation canceling going to stay in the game for the foreseeable future?

Yep, it's part of the game at this point, because we're, you know, five years old now. Taking that away and removing that is going to alienate a lot of our player base because they've learned this system and kind of how it works. I think where we can improve on that is find better ways to teach that.

There's also a lot of concern in the community specifically concerning the performance in Cyrodiil. So what are you doing there?

That's another big part of that. We've been doing audits of the entire combat system and where the non-performing areas are, that's part of it. We're looking at how characters load, we're looking at our assets load. We're working on it, there's just no magic button that we can push that's like, make it perform better. And always, with every update, we introduce things that try to improve performance. But we still have a long way to go.

Something that PC players have been wondering is whether you intend to add DirectX 12 or Vulkan support to Elder Scrolls Online in order to possibly improve the performance of the game on the rendering side.

Again, I think that before we move on to completely revamping renderers and doing those things, we want to fix what we have first and improve on that, then get that as optimized as we can.

One question that's dear to me is whether you're adding HDR support on PC. I play the game there, but I've also tried it on the Xbox One, specifically an Xbox One X. And I noticed that the game has HDR support on consoles and it looks great, with much more vibrant colors.

You know, that's a good question. I don't actually know the answer to that. I will have to write that down and ask the team.

Sure. Back to the game itself, I remember a while ago you talked about a very ambitious feature, it was called Spellcrafting. Is that something you may still consider in the future of Elder Scrolls Online?

It's not something we're actively working on now. I keep kind of saying the same thing over and I don't mean it that way, but we have to get our performance into a good state. We just released the Necromancer, that was kind of our focus. And, you know, I wouldn't say it's dead. But it's not something that's on our roadmap right now.

Is there going to be anything noteworthy in the next couple DLCs and updates for PvP players?

I guess the one thing that I will say is, the team has been watching how the Battlegrounds are going and they have some modifications to those maps based on game types. You know, we haven't been super thrilled with kind of the pacing on some of the maps and some of the game modes, and so they've altered the flow on some of those maps. With Elsweyr we added in the new Artifact weapon, Volendrung. We're watching that very closely. We see how that works. So far, the reaction has been really, really good. So, you know, we will probably do another one of those.

Elsweyr added the Necromancer class to Elder Scrolls Online, while Morrowind had previously delivered the Warden class. Do you think there are other class additions in the future of the game?

I think we definitely will not add them all the time. When it makes sense, we may do that. But it's not one of those things that, you know, we just always want to do. Players love them but when we decide to do it, it has to make sense. The Necromancer made a lot of sense with Elsweyr because the main villain was a necromancer and we were like, okay, let's do this. Let's make this happen. Again, we will make them, we will do them if they make sense.

Any plans at all to improve crafting?

Yeah, that's definitely one of the things on our radar. In terms of expanding the crafting and making it a little bit better in terms of just daily interactions, we see players crafting potions all the time, you have to hit the button over and over and over and over. There's an add-on called multicrafts and we look at those kinds of things. And we're like, hey, that's a cool quality life improvement, you know, when it makes sense, when we have time, we'll start to look into, you know, streamlining some of those things.

More and more multiplayer games lately have been adding some form of cross-play or at least cross-save to unite the community. Have you been thinking about this for your game?

I figured that's where that was going to go. We know this is kind of what players want. And we are starting to see more and more announcements about it. We don't have anything on the roadmap currently, but we're aware.

Elder Scrolls Online was recently revealed to be part of Google Stadia's launch line-up. What was it like to develop for this new cloud-only platform?

It's been very interesting. You know, there's always challenges building things for new platforms and whatnot. We're not talking a ton about it right now. But as we get closer to launch on it, we will have a lot more stuff to talk about.

All right. Anything you want to add about Elder Scrolls Online and what's going on at ZeniMax Online?

I would say now is probably one of the best times ever to get into Elder Scrolls Online. We have a huge community, we just announced before E3 that we added two and a half million players to the game between Summerset and the launch of Elsweyr, so it's a thriving game, a thriving community. We have a brand new class, we have dragons finally. There's just tons of things to do and explore.

So you're looking to support the game for quite a few years yet.

Yeah, the game is doing fantastic. We're already working on next year stuff and I have plans for past that.

Next year we're getting new consoles from Microsoft and Sony, so I'm guessing the game will have to be compatible with those as well...

Well, I'd say that about covers it, so thank you for your time.

Elder Scrolls Online Is Headed to Skyrim Next Year