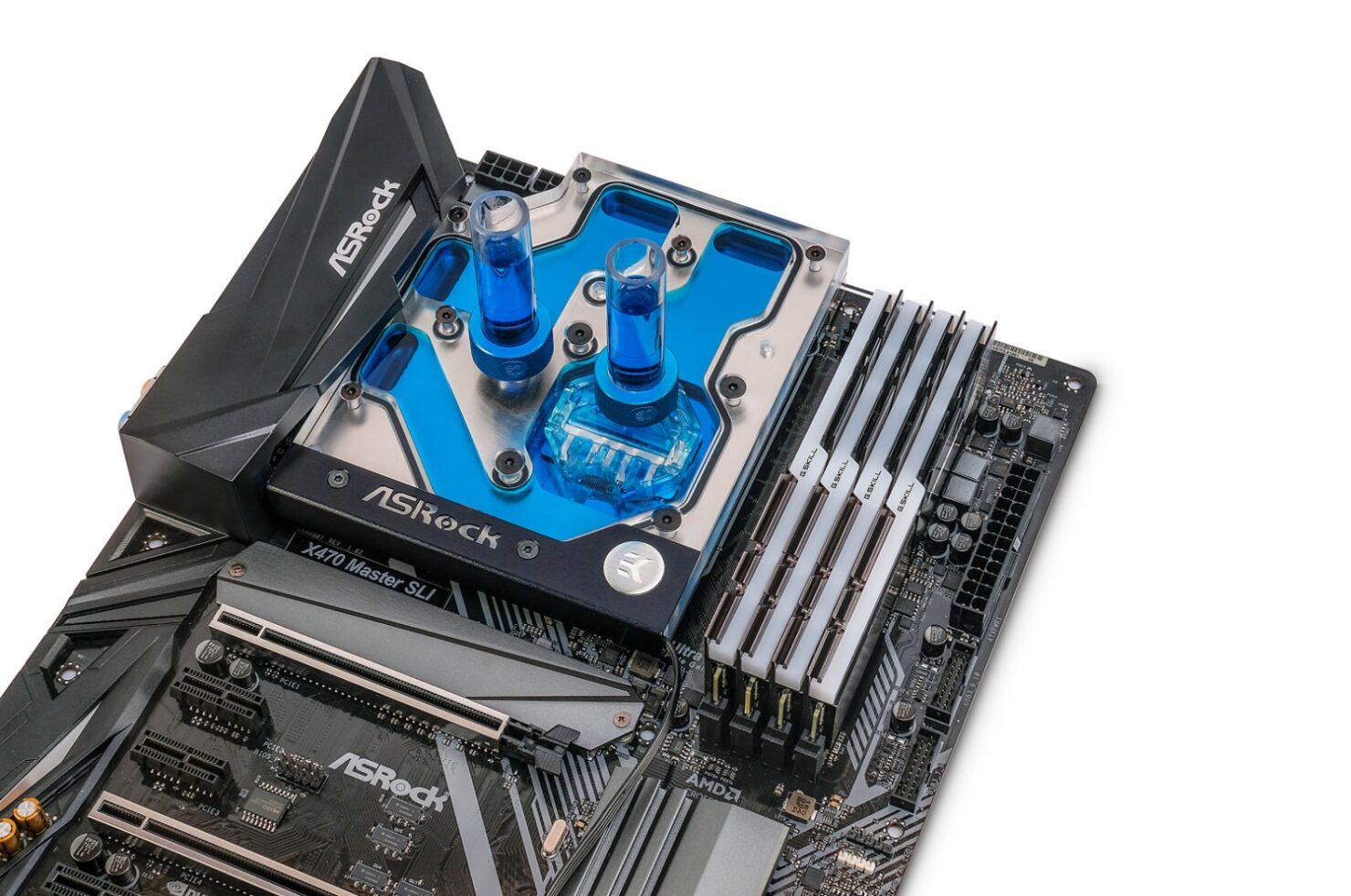 One of the leading brands in PC custom liquid cooling, EK waterblocks, will be releasing its all in one (CPU and Motherboard VRM) liquid cooling solution for the ASRock Fatal1ty X470 Gaming K4 and Asrock X470 Master SLI motherboards.

The EK-FB ASRock X470 Gaming K4 RGB Monoblock has an integrated 4-pin RGB LED strip and it offers unparalleled aesthetics alongside with superior performance and VRM cooling! The RGB LED in the monoblock is compatible with ASRock Polychrome RGB, thus offering a full lighting customization experience

This is a complete all-in-one (CPU and motherboard) liquid cooling solution for motherboards that support the second generation of AMD Ryzen and 7th Generation A-series/Athlon processors. Motherboards that are compatible with this monoblock are the following:

Designed and engineered in cooperation with ASRock®, this monoblock uses award-winning EK-Supremacy EVO cooling engine to ensure the best possible CPU cooling. This water block directly cools the AMD® AM4 socket type CPU, as well as the power regulation (MOSFET) module. Liquid flows directly over all critical areas, providing the enthusiasts with a great solution for high and stable overclocks. Like with every EK monoblock, EK-FB ASRock X470 Gaming K4 RGB  features high flow design and this monoblock can easily be used in the systems utilizing a weaker water pump as well.

A standard 4-pin 12V RGB LED strip is installed in the monoblock that connects to the motherboard’s 4-pin LED header or it can be connected to any other standard 12V 4-pin LED controller. The LED strip cover can easily be removed for adjusting the cable orientation or replacing the ordinary LED strip with a Digital LED strip or any other custom solution as well! The enclosed Digital RGB LED strip is compatible only with the dedicated 3-pin digital LED motherboard header. ASRock motherboards feature advanced LED lighting options and with the ASRock Polychrome RGB, users can individually address color to each LED on the monoblocks integrated Digital LED strip.

You can always check for compatible water blocks by using EK Cooling Configurator database where compatible graphics cards and motherboards are being added to the list on a daily basis:

EK-FB ASRock X470 Gaming K4 RGB Monoblock is made in Slovenia, Europe and is readily available for pre-order through EK Webshop and Partner Reseller Network for 139.90 Euros or $189.09